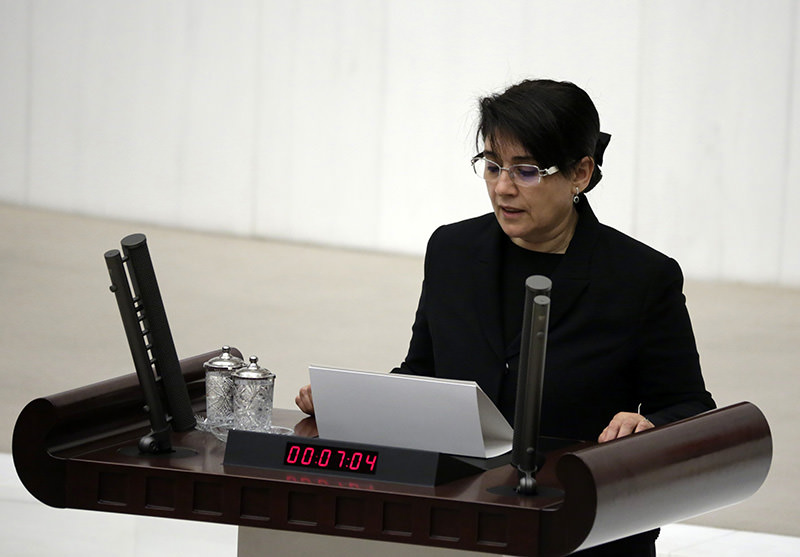 | AA photo
by Daily Sabah Nov 17, 2015 12:00 am
The Peoples' Democratic Party (HDP) deputy Leyla Zana has violated Article 81 of the Turkish Constitution on Tuesday, when she partially changed the oath while reciting it in parliament. Turkish parliament gathered on Tuesday for an oath taking ceremony, the first step for forming the government.

Before taking her oath at the lectern, Zana said "Biji Aşiti" which is a Kurdish expression for "Long live peace." She also changed the oath statement by saying "The nation of Turkey" instead of the "Turkish nation" at one point.

The Republican People's Party's (CHP) Deniz Baykal, who was presiding over the assembly as the acting speaker, asked Zana to recite the oath statement once again, but Zana declined and refused to take the oath once again, making it void.

In 1991, Zana had also violated the oath, when saying the final sentence of the oath in Kurdish, which was: "I take this oath for the brotherhood between the Turkish people and the Kurdish people."

The oath, read out loud by hundreds of MPs in the parliament, reads as follows:

"I swear upon my honor and integrity, before the great Turkish Nation, to safeguard the existence and independence of the state, the indivisible integrity of the Country and the Nation, and the absolute sovereignty of the Nation; to remain loyal to the supremacy of law, to the democratic and secular Republic, and to Atatürk's principles and reforms; not to deviate from the ideal according to which everyone is entitled to enjoy human rights and fundamental freedoms under peace and prosperity in society, national solidarity and justice, and loyalty to the Constitution."
Last Update: Nov 17, 2015 4:49 pm
RELATED TOPICS