Syrian Kurd says PYD not fighting for free Syria, but for PKK 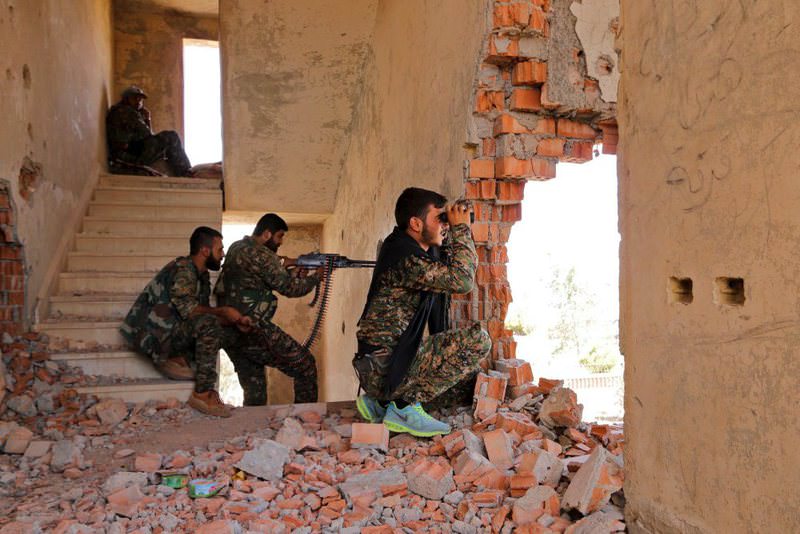 A representative from the National Council in Syria, which includes 15 constituent parties, all of which are threatened by the PKK-affiliated PYD, said the YPG are not fighting for a free Syria but to strengthen the Marxist PKK terrorist organization. The PYD has been accused of ethnic cleansing and human right violations

Kurdish National Council in Syria (ENKS) representative Ahmed Kasim claimed that the PKK-linked Democratic Union Party (PYD), oppresses Kurds more than Syrian President Bashar Assad. "The PYD is not fighting for a free Syria, but for the PKK. We agree with Turkey on that point. We want the PYD to end this torment imposed on Kurds," Kasim said.

Kurds living in Rojava have recently protested against the PYD administration. The passive protests by Kurds against the PYD's oppressive practices have purportedly been violently repressed by the PYD's armed People's Protection Units (YPG). Relating Syrian Kurdish protests against the PYD to Sabah daily, Kasim said: "The PYD abducts and jails opponent Kurds. It forces both women and men to take up arms and tries to impose the ideology of the PKK and its leader Abdullah Öcalan by making propaganda even in primary school course books. It collects high taxes for practically everything, including houses, cars, villages and even trees. Kurds living in Rojava do not want the PYD administration, which is a continuation of Assad's tyranny."

Acting as the largest representative of some 4 million Kurds living in Syria, ENKS was founded against the Syrian regime in 2011 by eleven opponent Kurdish parties and groups. Remarking that the organization was founded to protect the rights and liberties of Kurds in Syria, Kasim said: "Our main goal is to change the Syrian regime. For this purpose, we are maintaining a political and diplomatic opposition through peaceful ways. The main goal of the PYD is to form an administration model in Syria in line with the PKK and Öcalan's ideology. The PYD was founded by about 2,000 PKK members ranging from the Qandil Mountains to Syria after Öcalan was apprehended in 1999. The PYD does not work for a free Syria, it only works to realize the PKK's goals," he claimed.

He alleged that the PYD cooperates with the Syrian regime, and added: "During the first days of the revolution, some PKK militants brought from the Qandil Mountains to Syria were positioned in places evacuated by the regime. The regime withdrew leaving everything to the PYD. Kurds did not play an active role in the Syrian revolution and an agreement was made regarding the Jazira, Kobani and Afrin cantons. We had to step back since the PYD was armed and since we are engaging in our opposition activities through peaceful means. Weapons have a greater impact than the pen. The PYD was also supported by the U.S. since it fought [DAESH]. We wanted to provide assistance to the fight against [DAESH], but they did not accept our wish. We wanted to have a say in the administration of the cantons, but they did not accept that, either. Canton administrations are equal to the Assad regime. Then it was in Arabic, now it is in Kurdish. The PYD is imposing a tyranny on Kurds that is even worse than Assad's tyranny.

"Dozens of people were abducted by the YPG. Last week, a man set himself on fire to protest the PYD administration after his children, about 13 or 14 years of age, were abducted by the YPG. Hundreds of Kurds have been jailed or abducted since they oppose the PYD administration. The PYD also started to impose inconceivable taxation, particularly on Kurds. They started to collect taxes for houses, cars and even for olive and pistachio trees. They printed photographs of Öcalan even in primary school course books and began to make PKK propaganda in lessons. In Afrin, the administration imposed taxes varying from 10 million to 100 million Syrian pounds [$45,250 to $ 452,500] per village. People took to the roads to escape the PYD's tyranny. In the regions where cantons were declared, the number of people migrating even exceeded the number of people fleeing Aleppo and Daraa, where the violence of the war is intense. We want neither the PYD administration nor the cantons. They are obstacles hampering a free Syria. The PYD is not fighting for a free Syria, but for the PKK. We agree with Turkey on that point. We want the PYD to end this torment imposed on Kurds," he said.
RELATED TOPICS