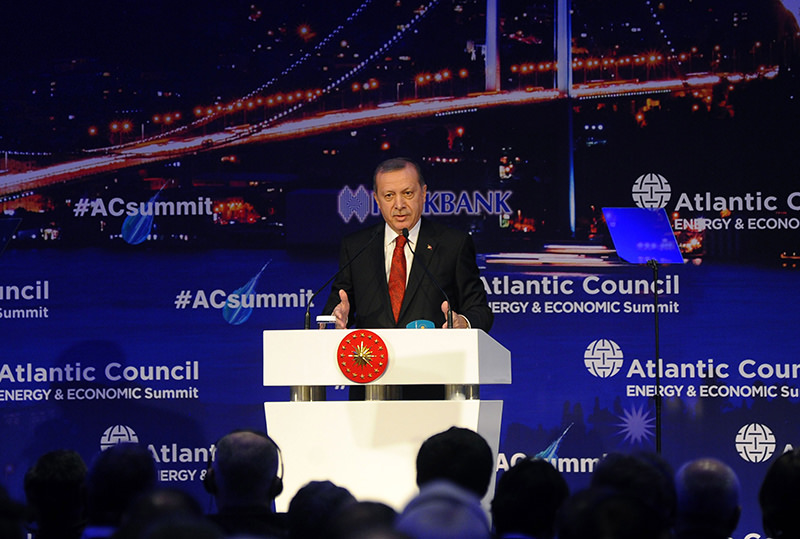 | IHA Photo
by Yunus Paksoy Nov 19, 2015 12:00 am
Speaking at the opening ceremony of the Atlantic Council of Energy and Economic Summit on Thursday, President Recep Tayyip Erdoğan asserted that all terrorist organizations in the region serve the Assad regime either directly or indirectly and Assad himself supports DAESH, which he said is evident if one is not "blind."

"DAESH is supported by Assad. Assad, at the moment, buys DAESH's oil and turns it into cash. One must be blind to not see this. It is clearly evident," Erdoğan said. Slamming the failure of states to question how Assad acquired chemical weapons, Erdoğan asked: "At the G20 summit, we discussed whether chemical weapons will be used or not. ... Who gave these weapons to Assad? We don't elaborate on it. We elaborate on cause and effect."

Erdoğan also laid emphasis on the recent Islamophobia trend in Europe and the U.S. following the Paris attacks. "Racism that is growing with Islamophobia is the biggest threat. I believe all leaders are aware of its threat to Europe," he said.

Suggesting that one cannot judge any religion by negative examples of its members, Erdoğan said: "These [terrorists] may be among Muslims as well as Christians. I curse these terrorists who are of the religion that I am proud to be a part of. We, as Muslims in the world, will take a firm stance."

Turning to the impact of DAESH attacks on the wider Muslim community, Erdoğan said those who "degrade Islam and Muslims on account of DAESH are making a big mistake." He added: "As a matter of fact, all terrorist organizations that exploit Islam, like al-Qaida and Boko Haram, are mostly killing Muslims and harming Muslims." Such groups have no relation to Islam, Erdoğan said.

"The blood of every innocent victim murdered by these organizations is on the hands of those powers behind them." He called for a united front by Muslim leaders to fight terrorism after the Paris attacks, warning that otherwise terrorists will commit further atrocities. "If not, those who knocked on our door in Ankara, will knock on your door elsewhere, as they did in Paris."

"We are at a crossroads in the fight against terrorism after the Paris attacks," Erdoğan said, and added that he strongly condemns the terrorists who claim to believe in the same religion as him.

He said Turkey is significant and plays a key role in overcoming the worsening refugee crisis. Asserting that the movement of refugees from Syria and Iraq to the European Union prove the importance of Turkish-EU relations, Erdoğan said: "The EU will gain [from the relations] just like everyone collaborating well with Turkey [does]. Turkey's value as an actor and partner is obvious."

'The people will decide fate of the new constitution'

In a joint interview with television channels ATV and a Haber Wednesday night, Erdoğan said there is a crisis of system and it can only be resolved with a new constitution and presidential system. "Let's take it to our people. I am believe that our people will definitely approve it," Erdoğan asserted.

Reiterating that it is a matter of the nation rather than his interests, Erdoğan urged for a new constitution that would bring forth a presidential system. Erdoğan also called on opposition parties in Parliament to work closely with the government to get rid of the constitution formed after the 1980 coup. Explaining that a referendum will not be necessary if opposition parties give consent to a new constitution, Erdoğan claimed: "Only through the support of the main opposition, new changes will be approved in Parliament in not even a month's time."

"I brought up the issue of a presidential system, I am bringing it up now and will do so again," he said, adding that the people, academics and politicians should discuss it to see whether it will benefit the country or not. He urged everyone to contribute to the discussions.

Refuting suggestions that he is seeking to further consolidate his own power, Erdoğan said it was a "matter for the nation."

The possible introduction of a presidential system in Turkey, which has had a parliamentary system since the early 1920s, is a controversial subject that was raised by Erdoğan after he won the presidential election in August last year. It was widely debated in the June general elections when it was supported by the Justice and Development (AK) Party, but was not as much of a prominent issue in the November snap elections. The constitutional change required would have to be approved by a referendum. The current Constitution was drafted in 1982 following a military coup and has undergone several amendments since.