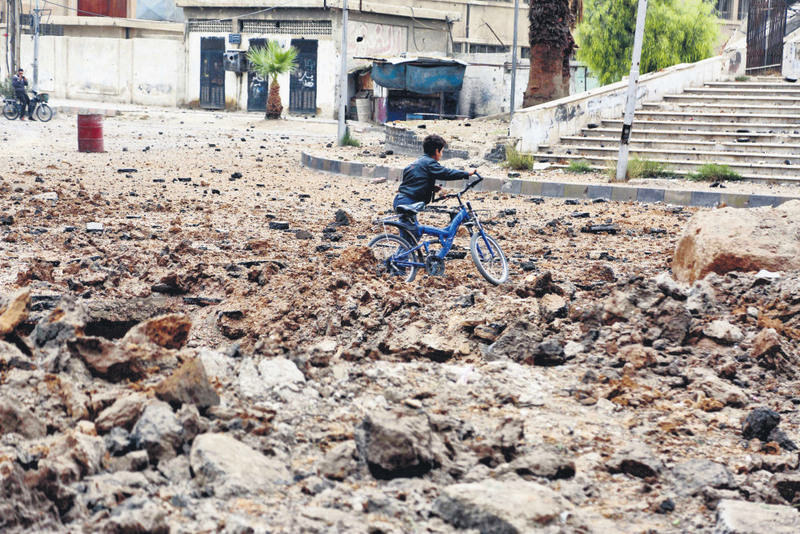 The global outrage against DAESH has reached its peak, leading to greater urgency to put an end to the militant group. Some powers have adopted a softer tone on the Assad regime, which allegedly are allied with DAESH and collaborate with it against the Western-backed opposition

Since the militant group first entered Syria and captured key locations, including the country's oil refineries, thousands of articles have been written that say Assad is the root of chaos and rise of DAESH. There is evidence of the connection between the Assad regime and the terrorist group, but world powers have not not gone beyond their usual rhetoric and weak reactions to the Assad regime, which kills hundreds of its people each week.

A group from DAESH and Syrian regime commanders were reported to have held a meeting at a gas production plant in the al-Shaddada area of Hasaka on May 28 of this year. The two warring factions allegedly met not to stop fighting each other, but to focus on a common enemy. The common enemy to be destroyed was the opposition forces, especially the moderate, Western-backed Free Syrian Army (FSA), which at the time had made significant gains against the regime in Idlib, Aleppo and Deraa.

It has long been claimed that DAESH works for Iran or Assad, but there was no evidence to prove these conspiracy theories. However, when looking at the war conditions, local and temporary agreements are possible. Both Assad and DAESH hate the rebel forces, as the regime considers the rebels to be terrorists and has entered a deadly war with them. DAESH sees the rebels as the main obstacle in its path to creating a new state in Iraq and Syria based on its strict interpretation of Islamic jurisprudence.

Assad has lost much of the country in the more than four-year war, half the population has been displaced, many areas have been leveled and masses of refugees are flooding Europe. Along the way, Assad's brutal military response has made him a persona non grata in most of the world.

A temporary reprieve is starting to seem more possible, setting the stage for what some observers suggest could be an arrangement that has Assad as part of a transition government that has a role in the priority of defeating DAESH, but then quietly steps aside. Russia and Iran would have to be a large part of engineering such a solution, but they have leverage of their own.

Assad might well have fallen already if not for the support of Hezbollah, the Iranian proxy militia based in neighboring Lebanon, whose efforts in the past two months have been joined by an active Russian bombing campaign. Both Iran and Russia have been difficult to read and predict, and until now both have backed Assad's insistence that he stay in power through the rest of his official term, which runs until 2021.

There are hints, however, that Russia's support may be wobbling even as it ramps up airstrikes against its enemies. Moscow made clear earlier this month that it is not crucial that Assad stay.

A Syrian opposition figure familiar with Russian's position, who spoke on the condition of anonymity because he did not want to damage relations with Russia, said Moscow's military campaign aims to facilitate a diplomatic track by strengthening Assad's position and weakening rebels enough that they all agree to come to the table.

He said Moscow has come to the conclusion that there can be no long-term solution for Syria while Assad remains in power. The question, he said, is how to let go of Assad while safeguarding state institutions and the capital of Damascus, which Moscow has yet to answer..

Russia has its own interests, wanting to keep its small warm-water naval facility at Tartus on the Mediterranean and remain a player in greater Middle East affairs.

Iran, another major ally, wants to maintain a counterbalance to Israel and keep another Shiite ally in the region.

Iran, which has suffered increasing casualties from the war, has sent more advisers to Syria in recent weeks as well as again reportedly dispatching Gen. Qassem Soleimani, who heads the elite Quds Force of the Revolutionary Guard.

This week Iranian Deputy Foreign Minister Hossein Amir-Abdollahian reiterated Tehran's support for the Syrian president, saying that "only Assad himself can decide on his participation or non-participation in[future] elections [and] it is only the people of Syria who can say whether they will vote for him or not," according to the semi-official Fars news agency.