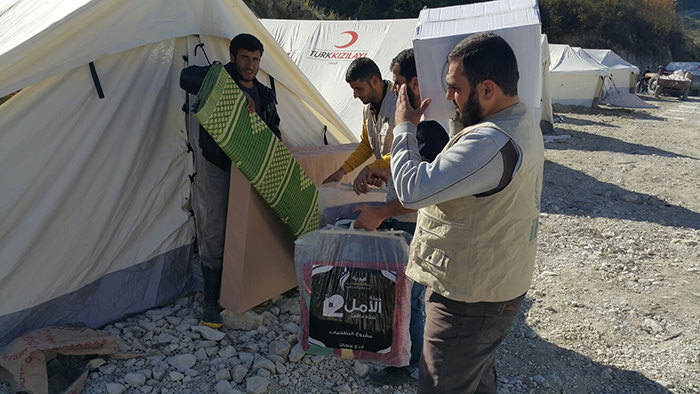 |AA Photo
by Daily Sabah Nov 24, 2015 12:00 am
Almost 300,000 Syrian Turkmens have been displaced so far since the beginning of the outbreak of the Syrian civil war in March 2011, and 25,000 of them have taken shelter in neighboring Turkey. Operations by Syrian regime forces together with Russian airstrikes on the Turkmen-populated Bayırbucak region in northern Syria are ongoing.

Heavily affected by the operations, reportedly there are also Arabs in addition to Turkmens leaving their homes and settling in refugee camps in the Yamadi village of Latakia province, suffering unfavorable living conditions. The refugee camps include tents set up by the Turkish Red Crescent. Apart from the Turkish Red Crescent, the Disaster and Emergency Management Authority (AFAD) also provided hundreds of tents to refugees.

In addition, Syrian regime forces have accelerated operations in the Turkmen region. Regime forces are reportedly given support in their operations by Iranian, Iraqi, Afghan and Lebanese fighter jets as well as the Russian air force.

The most strategic point in the area, Kızıldağ, is still under the control of regime forces. Tanks and artillery positioned in Kızıldağ reportedly fired on Turkmen villages and linking roads. In retaliation, a group of around 2,000 opposition forces have engaged in fighting in the area. Kızıldağ is located five kilometers from the Turkish border and plays a crucial role in the fight, which is the main reason for Turkmens to reclaim Kızıldağ from Syrian President Bashar Assad's regime. Meanwhile, the Turkish government called for a U.N. Security Council meeting to discuss attacks on Turkmens in Syria days after Ankara summoned the Russian ambassador to protest the heavy airstrikes on Turkmen regions where DAESH has no presence.

Turkey summoned Moscow's ambassador on Friday and called for an immediate end to the Russian military operations near its border, which it said included "heavy bombing" of Turkmen civilian villages.
Last Update: Nov 24, 2015 5:51 pm
RELATED TOPICS