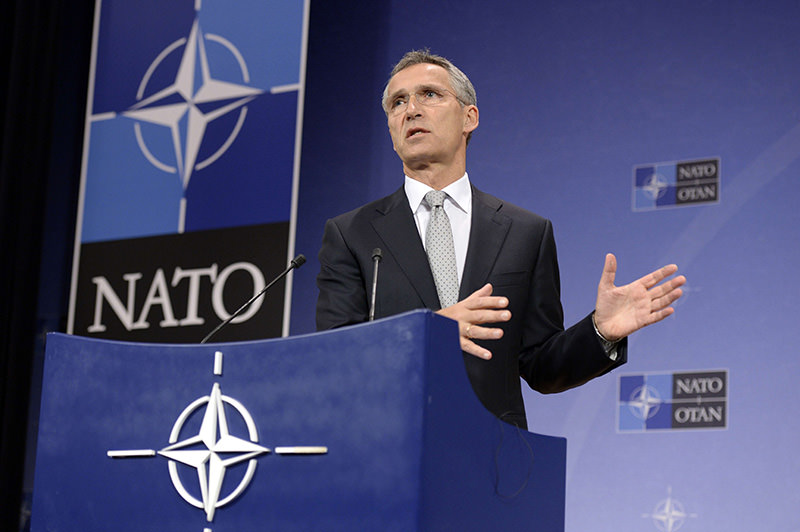 NATO Secretary General Jens Stoltenberg addresses a press conference at the NATO headquarters in Brussels, on October 6, 2015, ahead of a meeting of the alliance's defence ministers later this week.
by Daily Sabah with Wires Nov 24, 2015 12:00 am
The North Atlantic Treaty Organization (NATO) underscored that it supports the territorial integrity of Turkey, while confirming the information provided by Turkey regarding Turkey's shooting down of a Russian fighter jet along the Syrian border, which was discussed in an "extraordinary" meeting Tuesday.

"As we have repeatedly made clear we stand in solidarity with Turkey and support the territorial integrity of our NATO ally, Turkey," NATO Secretary-General Jens Stoltenberg told a news conference after the meeting of the alliance's decision-making North Atlantic Council.

General Stoltenberg also said that the information obtained by NATO complies with information provided by other allies and Turkey, confirming that the Russian SU-24 jet violated Turkish airspace. Stoltenberg also added that he has called on all parties to be prudent and to contribute to reducing tensions after Turkey downed a Russian jet which violated its airspace regulations.

Stoltenberg also stated that the situation is serious, but that he hopes for renewed contacts between Turkey and Russia. He said the assessments of other NATO members supported the Turkish version of events.

NATO deputy spokesperson, Carmen Romero, added that "NATO is monitoring the situation closely" and are in close contact with Turkish authorities.

Diplomats present at the meeting told Reuters that while none of the 28 NATO envoys defended Russia's actions, many expressed concern that Turkey did not escort the Russian warplane out of its airspace.

At the request of Turkey, the North Atlantic Council (NAC) held the extraordinary meeting at 6 p.m. local time (1600 GMT).

Meanwhile, the ambassadors of UN's permanent member countries in Ankara have been summoned to the Turkish foreign ministry. In addition, Russia's Charge D'affaires was summoned to Turkey's Foreign Ministry, while Moscow summoned Turkish Defense Attache in Moscow to the Russian Defense Ministry.

Russia's defence ministry said it viewed the downing of the jet as an unfriendly act and it was working on a package of measures to respond to such incidents.

"We consider the actions of the Turkish Air Force an unfriendly act," the ministry said in a statement, adding that it had issued an official protest to the Turkish defence attache.

Turkish jets shot down a warplane believed to be a Russian-type SU-24 after it violated Turkish airspace near Turkey's southern border with Syria, Turkish presidential sources said.

The warplane went down near Syria's northwestern Turkmen town of Bayırbucak.

Turkey's military said the downed foreign jet was given 10 warnings in five minutes before being shot down by two F-16 warplanes.

"A warplane of unknown nationality that breached Turkish airspace over Hatay's [province] Yayladağı region at 9.20 a.m. [0720 GMT] was alerted 10 times in five minutes," Turkish General Staff said in a statement, adding that the F-16s' response was in line with rules of engagement.

The military added that Turkish planes patrolling the region encountered the warplane at 09.24 a.m. local time.

According to footage from the scene, the plane's two pilots could be seen ejecting safely before the aircraft hit the ground in a huge of plume of smoke.