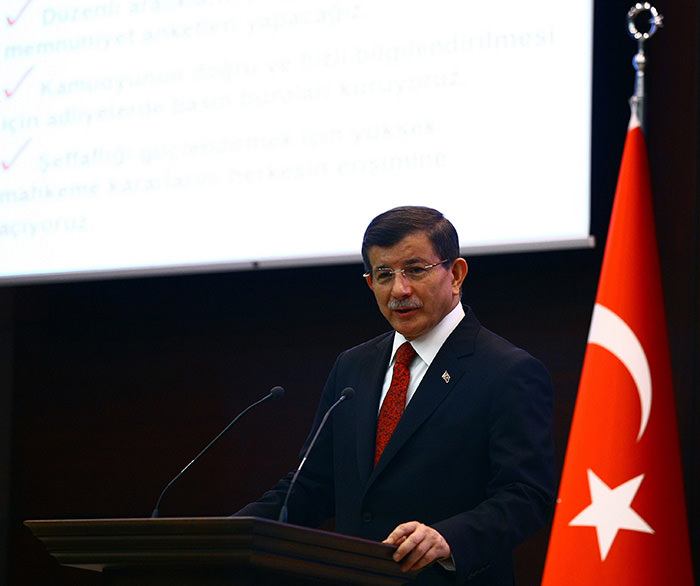 by Daily Sabah Nov 24, 2015 12:00 am
Prime Minister Ahmet Davutoğlu announced the new Cabinet ministers for the 64th government following the authorization from President Recep Tayyip Erdoğan on Tuesday. The meeting between Erdoğan and Davutoğlu began 50 minutes late due to the Russian warplane Turkey downed near the Syrian border on Tuesday after violating Turkish airspace despite being warned. Shortly after the meeting, Davutoğlu spoke at a press conference where he said there are three missions for the new Cabinet that firstly includes representing the nation, secondly serving the nation and finally, carrying the country for future generations.

The list of members of the Cabinet annnounced by Prime Minister Davutoğlu at a press conference in Ankara is as follows:

Deputy Prime Minister Mehmet Şimşek graduated from Ankara University's Faculty of Political Sciences Department of Economics in 1988. After working as a research assistant in the department of international economics and economic development he was awarded a state scholarship to the University of Exeter in the United Kingdom where he earned his doctorate in finance and investments in 1993. Şimşek previously worked as the chief economist and strategist for the emerging Europe, Middle East and Africa region at Merrill Lynch in London for seven years. In the 2007 general election Şimşek became a Justice and Development Party (AK Party) deputy and was appointed minister of state and then was promoted to finance minister in 2009. He was nominated as one of the 500 most-powerful people on the planet by Foreign Policy in 2013 and was also awarded the title of Finance Minister of the Year for Emerging Europe 2013 by Emerging Markets magazine.

Deputy Prime Minister Yıldırım Tuğrul Türkeş graduated from Hacettepe University's Economics Department and became member of Parliament for the MHP in 2007, serving as MHP deputy until August 2015. Türkeş was firstly referred to the MHP disciplinary committee and then expelled from the party following his decision to take part in Davutoğlu's interim Cabinet. As a result, on September 2015 he resigned from the MHP and joined the AK Party. Türkeş served as press adviser at the Trade Ministry and worked at several newspapers as a columnist.

Deputy Prime Minister Lütfi Elvan graduated from Istanbul Technical University studying mining engineering in 1983. He then earned a master's degree in mining engineering and operations research from the University of Leeds in the U.K. in 1986 and also holds a second master's degree in economics from the University of Delaware in the U.S. He was first elected to Parliament as an AK Party deputy in 2007 and served as maritime and communication minister from December 2013 to March 2015.

Along with ministers like Volkan Bozkır, an experienced diplomat who served as the EU minister and chief negotiator in the 62nd government, was reassigned to the post, Binali Yıldırım was announced as transport, maritime and communication minister. Additionally, another prominent politician, Mevlüt Çavuşoğlu, has once again been included in the new Cabinet as foreign minister.

Foreign Minister Mevlüt Çavuşoğlu is one of the founding members of the AK Party and member of the Parliament since 2002. He graduated from Ankara University in 1988 where he studied international relations. He then received a master's degree in economics from Long Island University in New York. He studied for his doctorate at Bilkent University and was a research fellow at the London School of Economics. In 2010 Çavuşoğlu was elected president of the Parliamentary Assembly of the Council of Europe (PACE), which is the highest level of office that a Turkish politician has held in an international institution, and served until 2013. In 2014 he was appointed EU ministry and then he served as foreign minister from August 2014 to August 2015. He also conducted the chairmanship of the Turkey-USA Inter-Parliamentary Friendship Caucus and received a medal of honor from Russia in 2011 and also from Ukraine in 2013. Çavuşoğlu was appointed as the Minister of Foreign Affairs in the 62nd government of Turkey.

Minister of Transport, Maritime and Communication Binali Yıldırım graduated from Istanbul Technical University's Maritime Faculty in naval architecture and ocean engineering in 1991. He holds a master's of science degree in maritime safety and environmental protection from the World Maritime University. After finishing his education, Yıldırım served as the director general of the Istanbul Sea Buses (İDO) from 1994 to 2000. He became an AK Party deputy in the 2002 general election served as transport, maritime and communication minister from 2002 to 2013.

EU Affairs Minister and Chief Negotiator Volkan Bozkır is an experienced diplomat who has served in various positions in New York, Brussels, Bucharest and Baghdad. He was the secretary general and permanent representative to the EU in Brussels before being appointed to his current post in the assembly. He is also the current chairman of the Turkey-USA Inter-Parliamentary Friendship Caucus. Bozkır served as the EU Affairs Minister during the 62nd government before the June 7 elections.

Berat Albayrak, the new energy and natural resources minister, is the youngest member while Veysel Eroğlu, the forest and water management minister is the eldest member of the Cabinet.

Albayrak, who was elected as an Istanbul deputy from AK Party in the June 7 elections, was re-elected as a deputy on Nov.1 as well. The new Energy Minister, also a Sabah newspaper's economy columnist, has held high-level position at numerous national and international companies. He is also a board member of Turkuvaz Media Group. Albayrak graduated from Istanbul University's Faculty of Administration in English and did his post graduate study at New York Pace University's Lubin School of Business. Albayrak holds a doctorate in banking and finance. He wrote his dissertation on financing renewable energy sector. He started his professional career in 1996 and held many senior positions in Turkey and abroad. He served as CEO of Çalık Holding, which is one of the leading Turkish conglomerates that focused on energy. Albayrak also gives lectures at Marmara University on banking and finance.

Nevertheless, the number of female ministers in the Cabinet increased to two. Sema Ramazanoğlu, a doctor by profession, was appointed as Family and Social Policy Minister and Fatma Güldemet Sarı, an architect by profession, as the Environment and Urban Planning Minister.

Sarı graduated from Tarsus American College and studied at Mimar Sinan University where completed a degree in architecture. She completed her master's degree at Yıldız Techical University in 1996. Sarı worked as an architect for several years and has been in active politics since 2008.

A major surprise in the new Cabinet is the exclusion of Ali Babacan, who is the former deputy prime minister responsible of economy. Along with Babacan, former Energy and Natural Resources Minister Taner Yıldız was also not among the new members of the Cabinet. The exclusion of veteran politicians like Mehdi Eker and Beşir Atalay from the list that includes both young and veteran politicians was also an unexpected move.

Justice and Development (AK) Party received 49,5 percent of the votes in Nov. 1 general elections, gaining 317 seats in the parliament, while the Republican People's Party (CHP) received 137 seats, followed by the Peoples' Democratic Party (HDP) with 59 seats and the Nationalist Movement Party with 40 seats.

Following the June 7 elections in which the AK Party garnered 40.8 percent of the vote and failed to receive a parliamentary majority with 258 deputies, the parties failed to come to an agreement to form a coalition, leading Turkey to an early election on Nov. 1.