No Daesh in Bayırbucak Turkmen region bombed by Russians, only civilians, Erdoğan says 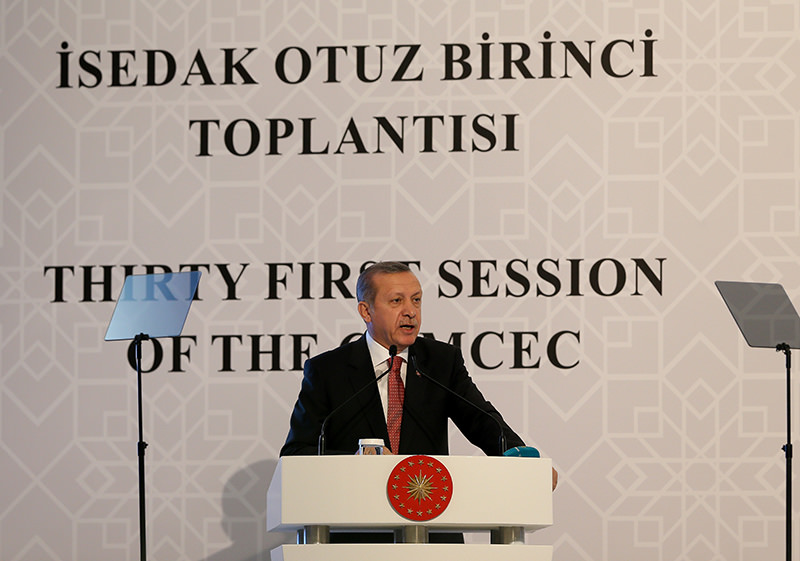 | AA Photo
by Daily Sabah with Agencies Nov 25, 2015 12:00 am
President Recep Tayyip Erdoğan on Wednesday dismissed Russia's claims and underscored that there are no Daesh terrorists in Bayırbucak region of Latakia Governorate in Syria and underscored that Turkmen civilians were there.

"Some say there is Daesh in that area. There are no Daesh terrorists in Bayırbucak region of Latakia, Daesh is in Jarablous" Erdoğan said at a meeting of the Standing Committee for Economic and Commercial Cooperation of the Organization of the Islamic Cooperation (COMCEC).

With regards to the downing of the Russian warplane by Turkey on Tuesday, President Erdoğan said that the jet was shot in Turkish airspace but crashed inside Syria.

President Erdoğan also underscored that Turkey does not want any escalation with Russia over the downing of the warplane on the Syrian frontier, while he pledged that Turkey would always defend its borders.

"We have no intention to escalate this incident. We are just defending our security and the rights of our brothers," he said, and added that no one should expect Turkey "to remain silent" when its border security is being violated. He reiterated once again that Turkey is against all types of terrorist organizations and the Assad regime, while noting that Turkey will do its best to ensure peace and security for the people of Syria.

He said that Ankara had previously conveyed its sensitivity regarding the violations and had done its best on its part to avoid such an incident. "The only reason that such an incident did not take place before is Turkey's good faith and its restraint. Turkey is not on the side of tension, crisis and animosity," he said.

During his address, the president called Daesh, al Qaeda, Boko Haram and al-Shabaab shadowy structures and criminal networks. "Their priority is to kill those Muslims who do not share their views. They damaged Muslim countries, our values, the best work of our culture, libraries, scholars and schools," Erdoğan said, calling for a united front against these terrorist networks.

On Tuesday, Turkey shot down a Russian SU-24 warplane that violated Turkish airspace at the Turkish-Syrian border after repeatedly ignoring warnings according to the Turkish military, in line with the rules of engagement.