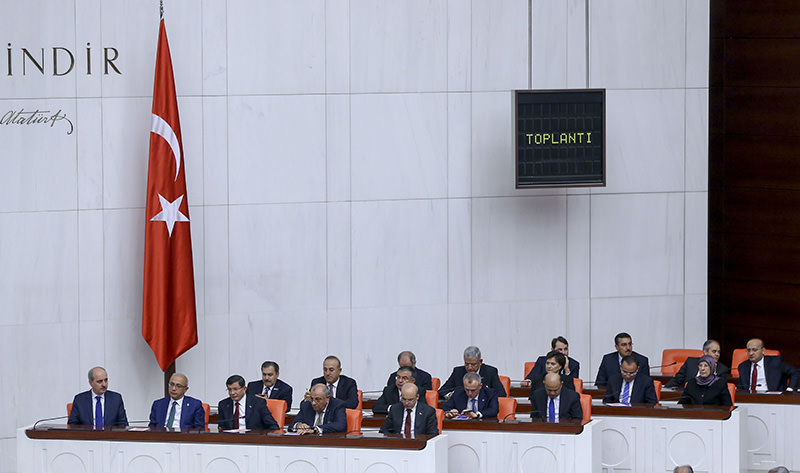 by Daily Sabah Nov 25, 2015 12:00 am
Following the official presentation of the members of the 64th government, the government's program was presented to Parliament on Wednesday by Prime Minister and Justice and Development Party (AK Party) leader Ahmet Davutoğlu.

The program covered certain topics such as democratization, political stability, sustaining the development of Turkey and making a new constitution. Above all it emphasized that this government will completely be a "reform government" in the framework of the 2023 vision.

The program addresses the five-month period between the June 7 general elections and the Nov.1 elections, stating, "In the process, as the AK Party, we found the opportunity to make an internal feud." In the context of democratization, it said the expectations and civil rights of Alevi citizens will be addressed through conversations with opinion leaders, adding that the legal status of Alevis would be recognized. Moreover, it pledged to find solutions for the education, settlement and employment problems of Roma citizens.

All parties are invited to contribute to a democratic constitution as AK Party aims to resolve identity issues and intends to enable every party in Turkey to participate in politics without being exposed to any discrimination.

The program also portrays the presidential system as a more efficient and appropriate model of government for the country, considering "political instabilities sourced by the parliamentarian system that was detached from its democratic base through being facilitated in a tutelage favoring manner."

In addition, the fight against the Gülen Movement, which is believed to have infiltrated the police and judiciary to overthrow the government, is referred to directly in the program under the topic of national security: "From the power that we took from the national will, we will continue our decisive fight to remove these structures completely."
Last Update: Nov 25, 2015 6:15 pm
RELATED TOPICS