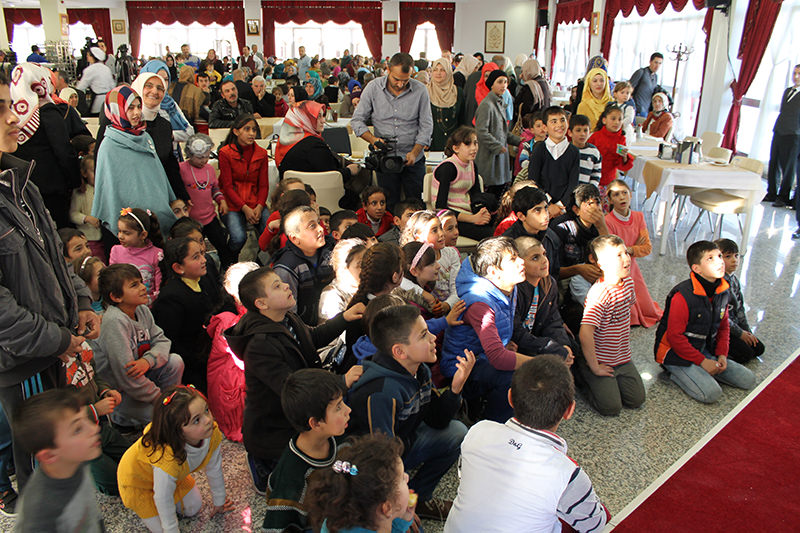 by Merve Aydoğan Nov 25, 2015 12:00 am
Presidency of Religious Affairs (DİB) head Mehmet Görmez met on Monday at the directorate with Turkmen families, mostly women and children who had escaped DAESH terror in Kirkuk, Mosul and Tal Afar. The meeting was jointly organized by the DİB and the Bir-İz Association, a nongovernmental organization that provides assistance to families in need. Görmez said: "We must not make [any distinction between] the religion, language or nationality of those who are oppressed. We as Muslims must protect all humans around the world who are oppressed and are undergoing torture."

Families speaking to Daily Sabah expressed their gratitude to the government and people for their hospitality while they all shared common agony in their stories. As the families told what they have been through, Görmez also said that Turkmens are now experiencing many difficulties to escape while leaving their country, families and loved ones behind.During the program Nejah Abbu, 42, from Iraq, who has been living in Turkey's capital Ankara for nine months, said she and her family had come from the city of Tal Abyad in Syria, where most of her relatives remain and they are unable to get any information on them. She said they risked death getting to Turkey.

Abbu told Daily Sabah that although she hopes the conflict in Iraq would end, she and her family wish to continue on with their lives in Turkey from now on. She also said they would like to receive financial support from the government as her sons are unable to attend school because they have to work. Additionally, Sarah Abbas, 45, said it has been nine months since she and her children came to Turkey. Abbas began by telling of their journey to Turkey, which lasted seven days, mostly on foot, and that as they were escaping DAESH was attacking. As Abbas said that DAESH was kidnapping women, young girls and raping them, her daughter Najle, 18, said her friends were victims of DAESH militants. She urged the Turkish government to help her son, who has psychological problems, either to get treatment or at least a document that states her child is ill.

Jaziyah Jawhar, 47, said she came to Turkey with her six children and that her husband had been killed by DAESH in Iraq. Jawhar said that two of her children were blinded from DAESH attacks and another child developed psychological problems as a result of the terrifying attacks.
Last Update: Nov 25, 2015 10:12 am
RELATED TOPICS