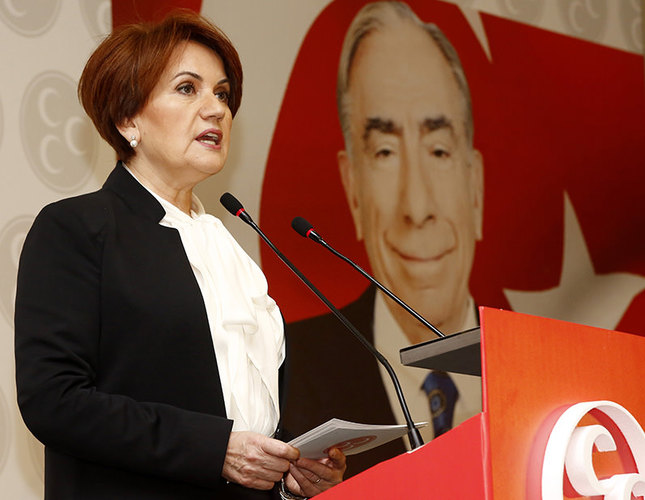 The portrait of Alparslan Türkeş, founding chairman of the MHP, is seen in the background while Akşener speaks. (AA Photo)

After repeated defeats and ongoing intra-party turmoil, former Parliament deputy chairwoman and former Nationalist Movement Party (MHP) deputy Meral Akşener held a press conference on Monday in which she called for an extraordinary congress to hold a party chairmanship election. During the press conference, Akşener revealed her candidacy for the position, saying that she is ready to take on any task she is assigned to. Due to the previous election results, criticism of the chairmanship of the MHP has begun with party opposition figures challenging the party's current chairman, Devlet Bahçeli. Former MHP deputy Koray Aydın also held a press conference on Saturday where he stressed the urgent need for an extraordinary congress.

Akşener underlined that, in the event of her gaining enough signatures to prompt an extraordinary congress, the party's supreme board delegation's decision would be considered valid. Akşener also said that their request for an extraordinary congress is not about revenge, but rather about the aim of taking the party into power. Stating that the MHP, "must not be stuck in the past and lose the future," Akşener further refuted claims that she met with former President Abdullah Gül and former Deputy Prime Minister Bülent Arınç to form an alternative party.

Aydın harshly criticized the party administration and said that the MHP is "exhausted, disappointed and needs rejuvenation." The former MHP deputy also added that the extraordinary congress can be held after obtaining the signatures of 20 percent of the delegates according to party regulations, although Aydın urged Bahçeli to call for the congress himself. Furthermore, Sinan Oğan, a former MHP deputy who was expelled from the party by Bahçeli prior to the June 7 elections, has announced his candidacy for the party chairmanship and called for an extraordinary congress in early November. It has reportedly been indicated that he has collected enough signatures from party delegates to convene an extraordinary congress.

Shortly after the results of the Nov. 1 elections in which the MHP's votes dropped from around 16 percent to 11.9 percent, the Ankara-based Objective Research Center (ORC) conducted a public survey on Turkey's political landscape. The survey revealed that support for the MHP has dropped to 10.5 percent as 42 percent of participants were unsatisfied with Bahçeli's leadership. Additionally, a poll conducted by the MAK Consultancy asked 5,670 participants in 31 provinces who should be the next chairman of the MHP. MAK's survey revealed that 34 percent of participants prefer Akşener, followed by Bahçeli with 26 percent and Oğan with 17 percent.

Share on Facebook Share on Twitter
Previous in Politics Experts are calling on Turkey to show leadership in the fight against... Next in Politics The PKK's acting leader Cemil Bayık, in an interview with BBC Turkish,...
DAILY SABAH RECOMMENDS