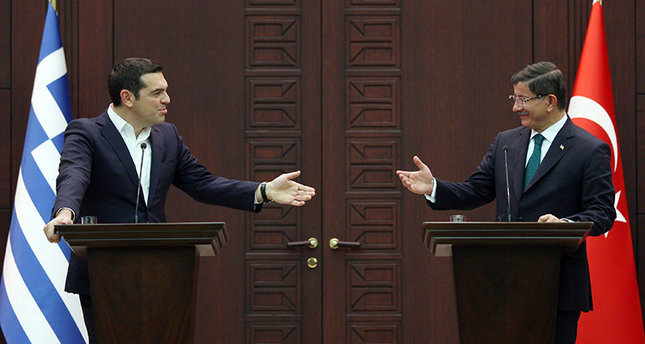 A highly unusual online exchange took place on Twitter between the prime ministers of Greece and Turkey late Sunday before the former deleted his tweets - but only from the English version of his account, leading many to question who handles the Greek PM's account.

"To Prime Minister Davutoğlu: Fortunately our pilots are not mercurial as yours against the Russians #EuTurkey" Tsipras tweeted.

Both prime ministers attended an EU-Turkey summit on refugees in Brussels Sunday. Tsipras did not explain whether his tweets reproduced a conversation between the two or were written especially for Twitter.

Tsipras said the two countries should focus on saving refugees, not on weapons, despite recent reports claiming that the Greek coast guard sank a boat carrying 58 refugees in the Aegean Sea on Nov. 12. The İhlas News Agency said the Turkish Coast Guard saved the refugees off the shore of Didim.

Turkey frequently reports Greek fighter jets violating its airspace in the Aegean and the Mediterranean. According to reports, violations have increased following the election of a new government in Greece. Turkish and Greek fighter jets engage in dogfights over the Aegean Sea, as Turkey and NATO countries accept six miles of territorial waters for airspace, whereas Greece unilaterally claims 10 miles.

"We have the most modern aerial weapons systems--and yet, on the ground, we can't catch traffickers who drown innocent people #EUTurkey," the Greek premier said in a fourth tweet.

Davutoğlu chose to respond to only the first tweet and not engage in a detailed dialogue.

"Comments on pilots by @atsipras seem hardly in tune with the spirit of the day. Alexis: let us focus on our positive agenda," @Ahmet_Davutoglu responded.

The tweets quickly sparked a vigorous reaction on the Twitter, with many condemning Tsipras engaging in dialogue in this manner, but a few defending him.

Then, the @Tsipras_EU account deleted the four tweets, which have remained posted, however, in Tsipras' Greek language account, @atsipras.

The deletion sparked further furious tweeting, with comments such as "who is handling your account?" being the most common.

Then, the English account posted further tweets, but less controversial this time.

"Important Summit today for the EU, Turkey and our broader region #EUTurkey"

A last Tsipras tweet obliquely referred to the deleted ones:

"We are in the same neighborhood and we have to talk honestly so we can reach solutions #EUTurkey."

And the comments, of course, continue, both for and against this kind of Twitter diplomacy.

There were some who saw the humorous side of things:

"The conflict escalates; a short while ago Tsipras commented 'you've gained weight' on one of Davutoğlu's Instagram photos from last summer," user @dimmarg tweeted, in Greek.

Share on Facebook Share on Twitter
Previous in Politics In a recent piece published in the Wall Street Journal, it was claimed... Next in Politics Experts are calling on Turkey to show leadership in the fight against...
DAILY SABAH RECOMMENDS