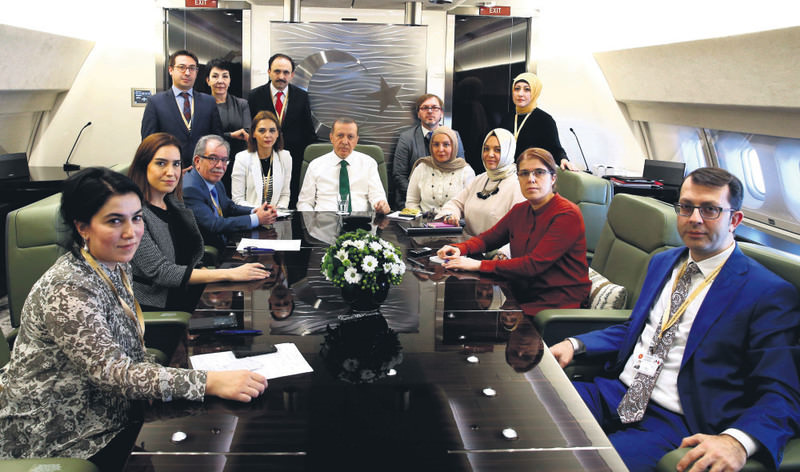 Stressing that Russia's recent defamation campaign against Turkey and himself only harms its credibility in the international arena, President Erdoğan once again called on Russian President Putin to prove his claims or resign

President Recep Tayyip Erdoğan, speaking to journalists accompanying him, said it is unfortunate that the Russian government deemed it appropriate to engage in a defamation campaign against Turkey. But he also added that no one in the international community took such rhetoric seriously. "This is the impression I got from my talks with leaders at the summit. Russia is harming its own credibility by engaging in such a defamation campaign. For example, Putin's dubious claim that Turkey is purchasing oil from DAESH has no credibility. All the claims, including those about my son are false. I invite him to prove his claims. If he does so, I am willing to resign. Is he willing to do the same if he cannot prove his claims?" He said that a Russian businessman was the main intermediary between terrorist DAESH and the Assad regime in oil trade worth millions of dollars. American officials corroborated this fact, he said while traveling from Paris, where he attended the opening session of the climate summit, to Qatar, adding that Russian businessman George Haswani purchased oil from DAESH and sold it directly to Damascus. The businessman also sold oil to other buyers, Erdoğan said.

Erdoğan also said Russia's claims that it is fighting terrorism and DAESH could not be more further from the truth, pointing to the fact that 90 percent of airstrikes carried out by Russian fighter jets targeted opposition groups backed by the anti-DAESH coalition, while only 10 percent hit targets associated with DAESH. "It is the Assad regime that is sustaining DAESH and the Russian government that is sustaining the Assad regime," Erdoğan said, describing Russian assertions that it was fighting against terrorist DAESH as "blatant lies."

The Assad regime saw DAESH as a factor that could perpetuate its rule, he said, once DAESH is destroyed, Assad's days are numbered.

Everyone knew from where Turkey purchased its oil, said Erdoğan, noting that the biggest purchases were made from Russia.

He said the Bayırbucak Turkmen community in the northwest of Syria had become the main target of Russia's airstrikes even though there was no DAESH presence in the region, adding that more than 500 civilians had been killed in these attacks. "Turkey is constantly raising these civilian massacres at international platforms. We definitely need to continue to voice our concern. We need to ensure this becomes an issue of global concern."

Despite the refusal of Russian President Vladimir Putin to have a meeting, his discussions with French President François Hollande, German Chancellor Angela Merkel, U.S. President Barack Obama and other leaders had shown that every ally had information that supported Turkey's arguments in the downing of the Russian jet that violated Turkish airspace. Merkel, Obama and Hollande told Putin that such an issue cannot be resolved through tension. We agree. Such matters should be resolved through diplomatic means.

All bilateral meetings during the climate summit had centered on the tension between Turkey and Russia, said Erdoğan, noting that all allies voiced their intension to stand beside Turkey. "Obama's stance is clear. He said the U.S. would not leave NATO ally Turkey alone."

Another issue that allies are resolved to pursue is a joint strategy against DAESH, the president said. "The most important issue concerning Syria now is DAESH. Another issue is the threat posed by DAESH to Turkey and the measures we need to implement to counter this threat."

When asked about Putin's previous remarks praising his courage and his current turnaround, Erdoğan said, "You need to ask that question to Putin."

Previously, when Turkey complained about the repeated Russian violations of Turkey's airspace, Russian officials had apologized, claiming language barriers. "There have been hundreds of airspace violations. Last year, there was a violation in the Black Sea that lasted 15 minutes. At the G20 summit in Antalya, he [Putin] asked me to see these jets as guests. I told him we couldn't accede to that." Putin also claimed that he had no idea about certain other violations involving Russian jets and ships, Erdoğan remarked, adding that Putin had assured him that he would look into the matter. "I asked him repeatedly about what Russia was doing in Syria. The last thing he said was that they were invited in accordance with U.N. decisions. I said not all invitations should be accepted and argued that supporting a murderer in Syria would tarnish Russia's image."

He also accused Russia of behaving emotionally is response to a plane entering Turkish airspace being shot down after repeated warnings. He said his remarks about the plane being unidentified before being shot down was meant to convey that if it was known that it belonged to Russia, the nature of the warning or the interval between the warning and the missile strike could have changed.

He also noted that Turkey had decided not to respond in kind to Russia's sanctions. "It is our strategic partner. We said we would continue providing them with foodstuffs. Look at what they are doing now."

Turkey would never stoop to a level to target Russian citizens living in Turkey, he said, adding, "We will decide in accordance with development together with the government, armed forces and all relevant bodies."
Last Update: Dec 04, 2015 3:19 pm
RELATED TOPICS