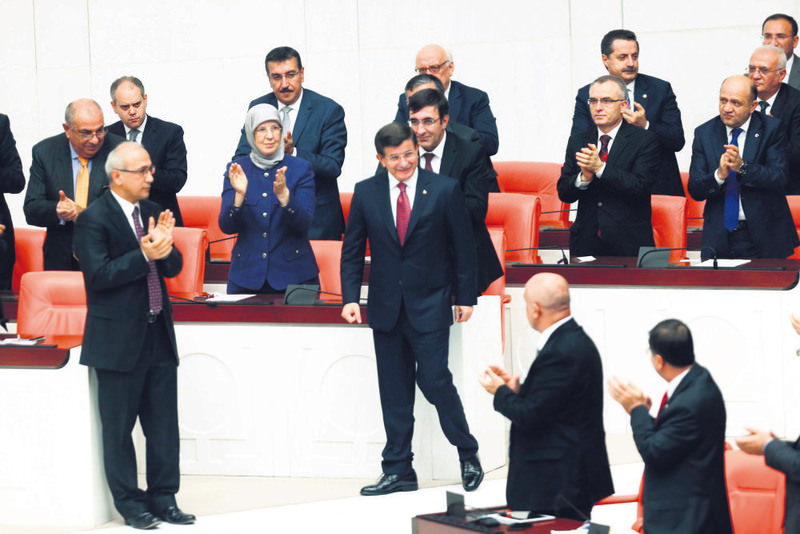 The 64th government won a vote of confidence in Parliament on Tuesday, and PM Davutoğlu assured that the new government will also represent the 50.5 percent of the country that did not vote for his ruling AK Party

The 64th term government won a vote of confidence from Parliament late Monday, achieving 315 votes of support when it required only 276 votes to be made legitimate. Prime Minister Ahmet Davutoğlu stated during a press conference he held prior to his visit to Cyprus on Tuesday that the new government also represents both the 49.5 percent of the electorate who voted for it and the 50.5 percent of Turkey who voted against. The new government is set to convene for the first time on Monday. Meanwhile, the Turkish Grand National Assembly's (TBMM) chairs and council members for the 18 special commissions in Parliament have been announced.

Prime Minister Davutoğlu began the Parliament session by thanking the deputies and then addressed the opposition parties: "The representation of the opposition in Parliament is a right as important as that of the ruling party. We will show them [the opposition] respect."

Davutoğlu underlined during his speech Monday that although the Justice and Development Party (AK Party) received 49.5 percent of votes, the AK Party will govern the whole nation. He also called on all opposition parties, saying: "Criticism is your utmost right. Let us all show tolerance even to the most contradictory opinions." Davutoğlu further added that every party in Parliament, including the AK Party, should bring their opinions to the table in an emphatic manner. He also commented on the EU's stance on the refugee crisis and said Turkey should not be perceived as an open-air prison, as Turkey will not turn down any refugee seeking asylum. Continuing on with his remarks on Tuesday during the press conference, Davutoğlu also addressed the increasing tensions between Turkey and Russia as he called upon Russia to reopen diplomatic communication channels to prevent a large-scale crisis. He also added that "The Syrian crisis is not a Turkish-Russian crisis. It is not even a Russia-NATO crisis. But, unfortunately, due to this persisting attitude, it has turned into a crisis between Turkey and Russia."

Meanwhile, as the establishment of a new constitution tops the agenda of the new government, parliament has assigned AK Party İstanbul deputy Mustafa Şentop, who also is a legal expert, to be the head of the Constitution Commission while Emrullah İşler has been named the head of the Security and Intelligence Commission. AK Party deputy Taha Özhan has been named the head of the Foreign Affairs Commission, which is vital for parliamentary diplomacy. Beşir Atalay, a veteran AK Party member, has become the National Education, Culture, Youth and Sport Commission chairman. AK party's Ankara deputy Fatih Şahin became the State Economic Enterprises Commission chairman and Mustafa Yeneroğlu, an AK Party deputy who is also an expert on Turkish-EU relations, has become the chairman of the Human Rights Monitoring Commission.

Additionally, Prime Minister Davutoğlu on Monday urged political parties to cooperate to establish the 2016 budget in a timely fashion for the benefit of the nation. Speaking to members of the press, Nurettin Canikli, the AK Party group deputy chairman, stated that their party has offered the Nationalist Movement Party (MHP), Republican Peoples Party (CHP) and Peoples Democratic Party (HDP) an opportunity to help establish the 2016 Central Administration Budget Calendar rather than a temporary budget. The budget normally take 18 days to be discussed but the parliament's Plan and Budget Commission is set to take between eight to 10 days of discussion at the TBMM General Assembly. Canikli said that if discussions start on Dec. 7, the agreement on the budget would be finalized on Dec. 26.
RELATED TOPICS