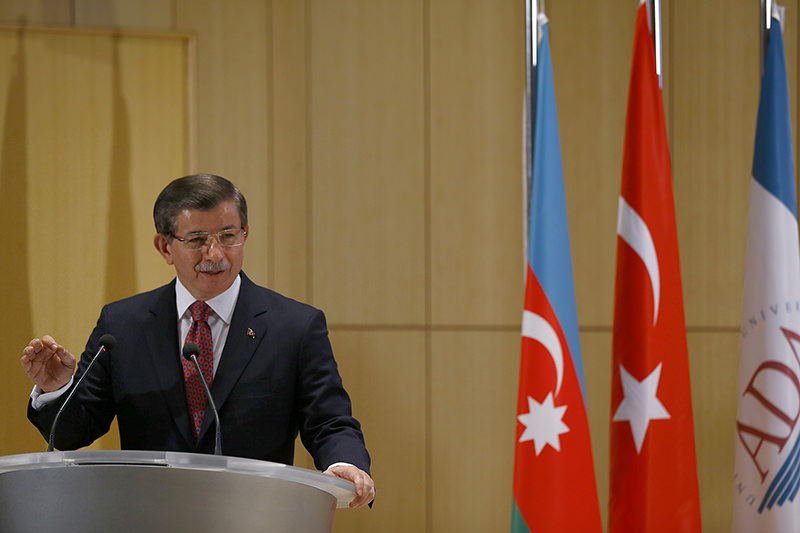 | AA Photo
by Daily Sabah Dec 04, 2015 12:00 am
Prime Minister Ahmet Davutoğlu offered to host a face-to-face meeting with Russian leaders to settle the diplomatic row over the recent downing of a Russian warplane by Turkish jets.

"I call on Mr. [Vladimir] Putin and all the Russian leadership to handle our issue as we sit face-to-face and talk it over," Davutoğlu said. He was speaking on Friday during a visit to the Azerbaijan Diplomacy Academy in the country's capital, Baku.

Davutoğlu also said his country cannot be "brought to its knees" by Russian economic sanctions imposed in response to Turkey's downing of a Russian warplane.

The fallout comes after an intruding Russian SU-24 was shot down on Nov. 24 by Turkish F-16s near the Syrian border after it ignored 10 warnings in five minutes.

President Recep Tayyip Erdoğan challenged Putin, and said he will step down if Russian claims that Turkey buys oil from DAESH are proven. He called on Putin to resign if they are not.

Davutoğlu expressed his disfavor at Moscow's claims, saying they will not help find a solution to the dispute. "Let's not use campaigns against each other that resemble the Cold War era, with claims like 'Turkey supports DAESH', which you [Russia] did not even mention two weeks ago," he said.

During a press conference on Thursday before his plane departed for Azerbaijan, Davutoğlu described the DAESH oil trade claims as lies from a "Soviet propaganda machine." "We cannot accept, understand or tolerate the recently escalating rhetoric and discourse along with the comments of Russian leaders on Russian TV channels, which turned into a smear campaign against Turkey," he said.

He reiterated that the crisis posed no problem between Turkish and Russian individuals. "I am addressing Moscow and all Russian people from here: We do not bear the merest uncertainty, concern or negative feeling toward the Russian people. Turks and Russians are two great peoples that shaped the history of Europe and Asia together," he said.

Davutoğlu stressed that Turkey did nothing but apply the rules of engagement by exercising its legitimate right to self-defense against an unidentified plane that entered Turkish airspace. "No one can blame Turkey for this or wait for an apology. We will not apologize for protecting our borders," he added.

Davutoğlu also warned against a repeat of such incidents as several air forces will be flying in the same airspace as part of the anti-DAESH fight, especially after the U.K. and Germany announced they will join the international coalition's efforts.

"It is necessary for all [involved] countries to conduct the fight only against DAESH and in coordination and with the knowledge of each other. Because it means serving DAESH to slaughter Turkmens or drain the moderate opposition in order to sustain the Syrian regime by saying 'we are conducting operations against DAESH,'" he added.