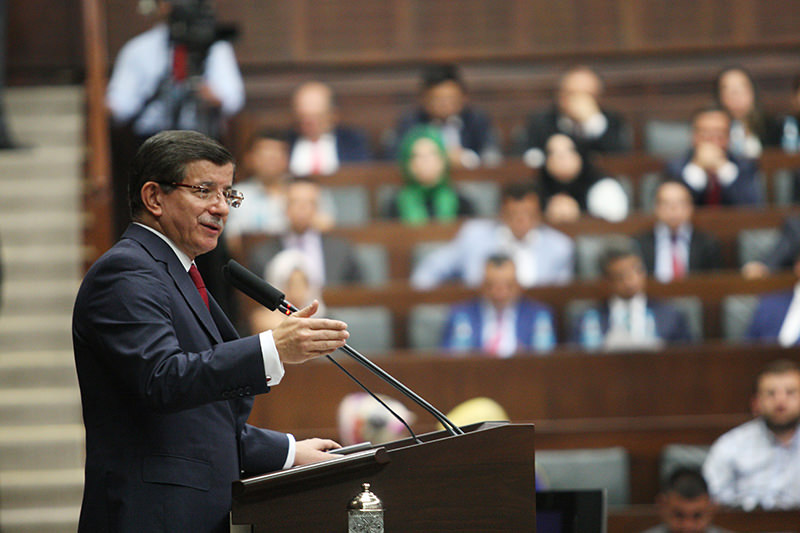 | AA Photo
by Daily Sabah Dec 08, 2015 12:00 am
Prime Minister Ahmet Davutoğlu said on Tuesday that Turkey has trained 2,000 people in Bashiqa camp upon the request of Mosul governor.

Speaking at the Justice and Development (AK) Party's parliamentary group meeting, Davutoğlu, said that he will visit Baghdad as soon as possible, and that Turkey 'does not have an eye on anyone's lands.'

Davutoğlu underscored that the Bashiqa camp is not new, and has been running since a year and has played a significant role in the recapture of Sinjar from Daesh terrorists, as noted by Barzani. He added that the increase in the number of troops was a precaution taken in line with security concerns, while saying that those who interpret it in a different manner are provoking on purpose.

"Turkey puts great effort to bring peace and stability to the region surrounding it" the prime minister said.

He also noted that hesees growth in industrial output continuing and contributing to fourth-quarter economic output, while he called on the opposition parties to actively participate in the reform process.

With regards to the relations between Turkey and Russia following the shooting of a warplane for airspace violation, Davutoğlu said that Turkey has discussed possible measures against Russia and will impose sanctions if necessary, while adding that Ankara remains open to dialogue with Russia.

Davutoğlu said that Turkey urges Iran to use common sense and added: "We supported them when whole world stood against Iran at the UN, Turkey and Brazil voted against sanctions on Iran, but now they fail to support us even though they know very well that Turkey is right."

He noted that the friendly relations between Turkey and Iran will suffer a great deal if Iran continues its hostile attitude.

He also said that Turkey is determined to accelerate "harmonization" with the European Union, following the government's pledge to help stem the flow of refugees in return for cash from the EU last month.