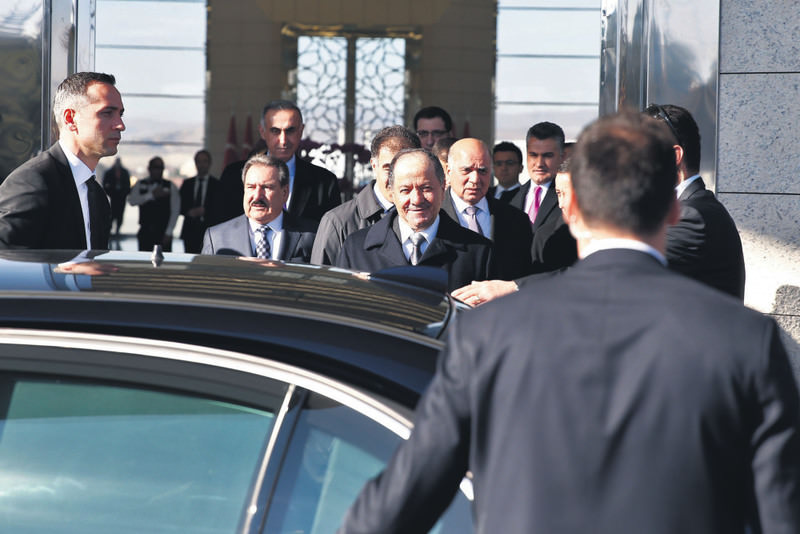 The president of Iraq's Kurdistan Regional Government, Masoud Barzani, who backs Turkey's stance on the deployment of its troops to Mosul, arrived in Turkey on Wednesday to discuss mutual relations, especially on energy, and cooperation against terrorist organizations in the region

The president of Iraq's Kurdistan Regional Government (KRG), Masoud Barzani, arrived in Ankara on Wednesday and met with both President Recep Tayyip Erdoğan and Prime Minister Ahmet Davutoğlu. They discussed the widely debated issue of the presence of Turkish soldiers in Mosul as well as further cooperation in combating the DAESH terrorist organization. Turkish officials have reiterated Ankara's respect for Iraq's territorial integrity, but have confirmed that the troops will not be withdrawn as coordination with Iraq continues.

Barzani has also made statements recently indicating that the Turkish forces came to Iraq in coordination with Baghdad to provide military training for the National Mobilization, which will conduct operations against DAESH in Mosul. Along with DAESH terror, Turkish officials and Barzani reportedly discussed the PKK's terrorist activities in both Turkey and Iraq as Barzani's Kurdistan Democratic Party (KDP) and Ankara hold the same position on the PKK's regional and local attempts at existence. According to an official statement from the government, Barzani discussed regional developments and also encouraged further cooperation between the KRG and Turkey and enhanced bilateral relations between the two governments. Barzani's visit, which will end Thursday, is significant since both sides display support for each other in economic relations as well as coordinated combat against DAESH.

Experts have indicated that all foreign forces in Mosul are not there to fight, but rather to train local forces to fight DAESH, which was also claimed by Turkish government officials. According to the KRG, the recent deployment of Turkish military equipment and experts are meant to replace a unit already deployed in Northern Iraq. The Turkish military said that more than 2,500 peshmerga soldiers have received training in the use of heavy machine guns, mortars and artillery as well as first-aid.

Regarding the Turkish military's presence in Mosul, Barzani had previously said Tuesday that the presence of Turkish forces in Iraq was within the context of a prearranged deal between the two countries to train forces that will participate in the anti-DAESH operation in Mosul.

At a joint press conference with German Foreign Minister Frank-Walter Steinmeier, Barzani said: "According to the information we received, Turkey and Iraq had previously agreed on the deployment of Turkish soldiers around Mosul. The two countries had formed such an alliance to train voluntary soldiers participating in a [future] Mosul operation [to take it back from DAESH]."

"The deployment in question has been done in line with the agreement between the parties. In my opinion, this issue has been exaggerated," he said

Barzani also said the KRG welcomes any attacks on DAESH, but Russian attacks are hurting the region by forcing it to close its airports, Kurdish media reported on Tuesday.

"This issue needs to be solved and we ask Russia to not make problems for the KRG's airline," Barzani said.

He said the KRG is in contact with Baghdad about resolving the problem of suspended flights at the international airports in Irbil and Sulaymaniyah due to Russian missile attacks on DAESH in Syria.

Moreover, Barzani said Turkey's military presence in Mosul was determined within the framework of a strategy against DAESH, and it has been ongoing for more than a year. Speaking to TRT Kurdi on Monday, he said: "This camp was established in a period of war with DAESH. This step has been taken for the benefit of all of Iraq. … Turkey has helped in several places of Kurdistan. These camps were previously established in the Sulaymaniyah and Soran regions."

Amid debates on the natural gas trade between Turkey and Russia following Turkey downing a Russian jet, KRG officials have said that they are ready to meet Turkey's natural gas needs. The head of the KRG Parliamentary Committee for Industry and Energy, Sherko Jawdat, said on Sunday that Turkey and the KRG have a strategic agreement on the delivery of gas in 2017.

"Kurdish gas will reach Europe via Turkey. The Kurdish region can fill the gap created by Russia's gas cut-off to Europe," Jawdat said.

Gas reserves in Irbil, Dohuk and Sulaymaniyah are estimated to be more than 1.7 trillion cubic meters, but will reach up to near 2.4 trillion cubic meters if the disputed areas between the KRG and central Iraqi government in Baghdad, including Kirkuk, are made available for use.