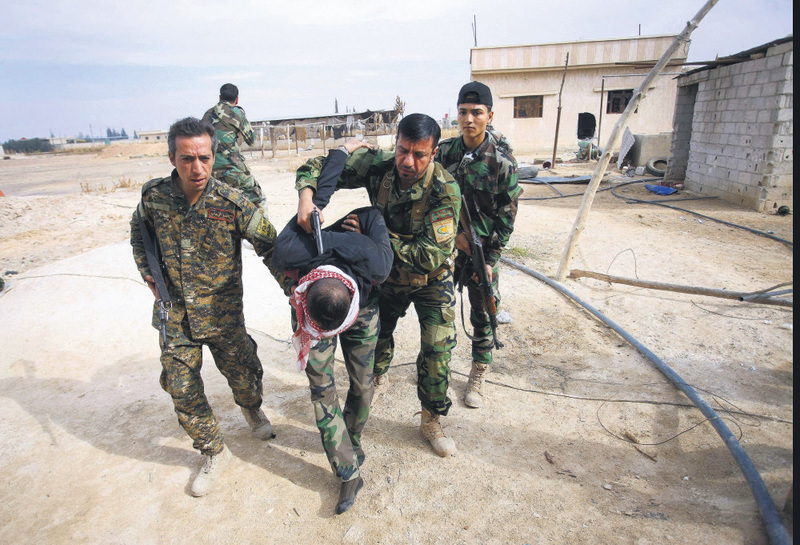 Iraqi and Lebanese Shiite fighters from a group called the Hussein Brigade arrest a Free Syrian Army fighter in the Hatita town of Damascus, Syria, Nov. 22, 2013.
by Yunus Paksoy Dec 11, 2015 12:00 am

A day before PM Davutoğlu announced the government's plan to give legal status to Alevi houses of worship, President Erdoğan asserted that sectarianism has no place in Turkey and criticized Iran's sectarian policies and its strong influence in Iraq and how both countries fuel the civil war in Syria

In a televised interview with Al Jazeera, President Recep Tayyip Erdoğan slammed Iran and Iraq for their collaboration on sectarian policies and asserted that Turkey fully opposes such a mentality. "Today, we are a country that entirely opposes sectarianism. Those who adopt sectarianism are obvious," Erdoğan argued and pointed to Iran and Iraq. "It is Iran. It is Iraq." Erdoğan went on to levy criticism at Iraq for collaborating with Iran on sectarian policies, saying: "Unfortunately, Iraq is in collaboration with Iran on the issue of sectarianism."

Erdoğan added that this cooperation continues in Syria as well. "What lies behind the problem in Syria? Again it is sectarianism," he contended.Underscoring that the issue of sectarianism should be resolved in Syria, Erdoğan pondered over how Sunnites in the region will fare. "There are Sunni Arabs, Sunni Turkmens, [and] Sunni Kurds. What about their security?" Erdoğan asked. He suggested that these people need to feel confident and secure thanks to a train-and-equip program. "And steps that are being taken here are in this direction," he said.

Erdoğan also underlined that Arabs living in Iraq have long lost most of their rights. "Unfortunately, we cannot see a fair regime in Iraq at the moment. Therefore, a part of the society is worried," he argued.

President Erdoğan also commented on the recent rift between the Turkish and Iraqi governments over the deployment of extra Turkish troops to Mosul.

Underscoring that the troops were sent in to Bashiqa in 2014 at the request of the Iraqi Prime Minister Haidar el-Abadi, Erdoğan expressed his disbelief as to why there was no such reaction back then. "They know all this and are informed about it. Now one has to ask: Where were you when that Bashiqa camp was set up?" he said.

Erdoğan went on to rebuke any allegation that Turkish troops were sent in as part of an invasion, saying: "You uttered no word since that day. And now you take such a step in the wake of certain developments in the region. And we increased [the number of] our training teams there for the purpose of strengthening the Bashiqa camp. They are by no means a combatant force there."

"Turkish soldiers have reached the Mosul Bashiqa region. They are there as part of routine training exercises. One battalion has crossed into the region," the source said. The Turkish soldiers are training Iraqi troops, he added.

Along with 150 soldiers, 20 to 25 tanks were also dispatched to the area, the sources added. The total number of troops in Mosul is 1200, sources told Daily Sabah.
RELATED TOPICS