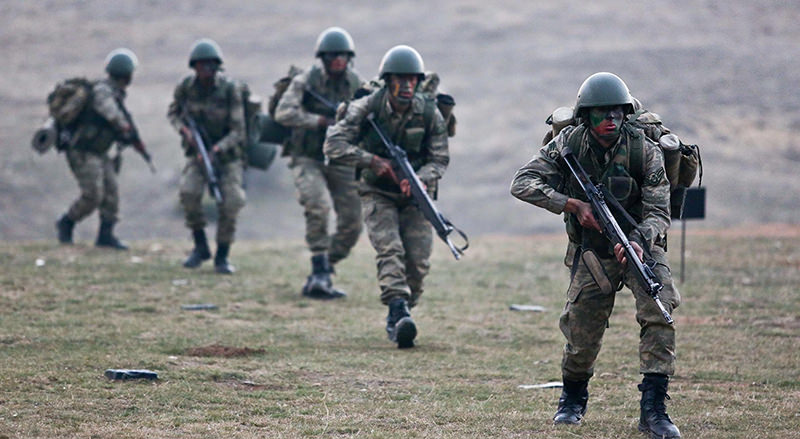 Turkish troops have immediately returned fire on Daesh terrorists following the attack, Turkish officials have said, while the Turkish military said in a written statement that Daesh attacked the camp with Katyusha rockets. Sources from the Turkish Ministry of Foreign Affairs said later on the same day that Daesh targets in the area have been destroyed by Turkish forces.

Reuters news agency later released a footage showing the attack and its aftermath.

A senior security official speaking to Daily Sabah has said that all four servicemen have since been evacuated and are currently undergoing medical treatment.

"We are pleased to confirm that their conditions are stable," the official said.

"Force protection is a key part of the anti-ISIS training efforts in the Mosul area, with which Turkey has been involved for more than a year. At this time, a number of Turkish troops remain stationed at the frontline against ISIS and we remain committed to playing an active role in the war on terror" the official added.

The rocket fire was part of a broader offensive by Daesh against Kurdish positions in northern Mosul and other parts of the frontline, according to a general there and Jabbar Yawar, the secretary general of the Kurdish peshmerga forces.

Coalition forces have supported Peshmerga forces fighting Daesh militants that have wounded the Turkish soldiers in the area, a senior US official stated. Speaking to Daily Sabah, the official said "We can confirm the Peshmerga forces in northern Iraq are currently repelling an ISIL attack northeast of Mosul. CJTF-OIR is supporting these ground forces through both airstrikes and intelligence sharing."

Turkey said the 150 soldiers and up to 25 tanks were stationed at Bashiqa to protect servicemen training Iraqi volunteers to fight Daesh.
The training mission has been in operation since March and is not assigned combat duties.