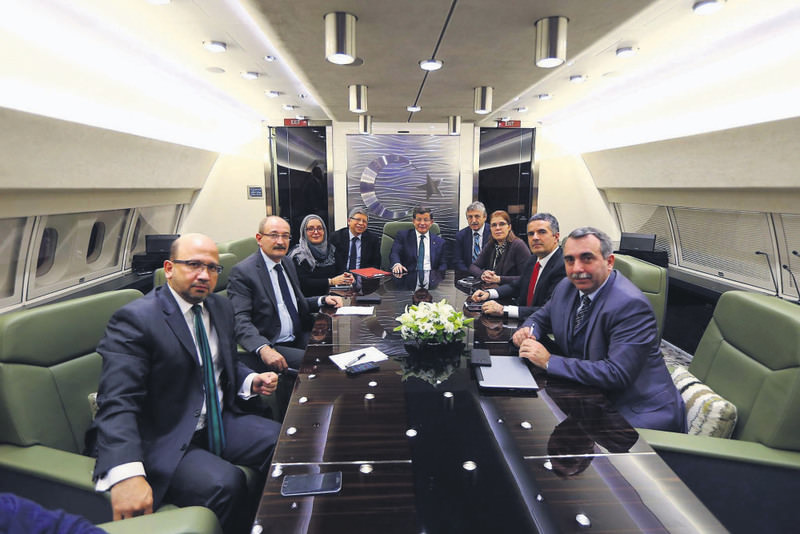 Prime Minister Ahmet Davutoğlu spoke with journalists on the prime ministerial plane on his way back to Turkey from Bulgaria about the government's counterterror strategy in the face of the PKK terrorist organization taking the war to the streets. Davutoğlu underscored that security forces and the government adopted a new strategy on July 23, the day after the PKK killed two policemen in their sleep in Ceylanpınar, and it is composed of four intertwined areas of the fight. "One of them is the camps in the Qandil Mountains in Iraq. Secondly, rural areas within Turkey such as Yüksekova, Dağlıca, Çukurca, Beytüşşebap, Ağrı, Tendürek, namely mountainous areas. The third link in the chain is urban areas. They came from the mountains to urban areas and positioned themselves near graveyards. And then came the urban militia, also known as the Patriotic Revolutionary Youth Movement (YDG-H). A road map was drawn and the fight was launched from the outer most link on July 23," Davutoğlu explained. While people are forced to migrate and leave their homes behind, PKK terrorists try to do their best to prevent people from fleeing the war-like zone. Blocking the roads, terrorists also reportedly open fire on civilian vehicles.

"We developed a concept with regards to how this fight would continue. And they [the military] said they were ready there and it started that night. We envisaged 12 critical districts in our assessment in November. When you look at the fight two or three months ago, Lice, Silvan, Varto, Kulp, Cizre, Doğubeyazıt and Yüksekova are still ongoing. They all were there. We took control in most of these critical districts. Four or five places are remaining: Sur, Cizre, Silopi, Nusaybin and Dargeçit. It is focused on there at the moment," Davutoğlu said, adding that these districts are significant due to their proximity to the Syrian border. He also stressed that operations were carried out meticulously so as not to cause civilian casualties.

Underlining that the fight in the Sur district of Diyarbakır is tough because of the presence of historic sites, a crowded population and underground tunnels, Davutoğlu said: "The reason why it is difficult is that you have to carry it out within the rules of the law. There should not be any disruption. Namely health care services, food, so and so forth." He added that cooperation between the police and the military along with the intelligence service is exceptionally good. "We need to patiently wait and see the effect of this fight," he argued.

When asked about locals that flee their homes due to the current situation in the region, Davutoğlu expressed his sorrow over the recent incidents. "One cannot leave these places to their [PKK] justice and mercy. The barbarians and tyrants caused damage both in historic and humanitarian ways. We are doing our best to take humanitarian measures," he said.

After a question about the current situation of teachers, Davutoğlu said that as a professor he suffers from the fact that education has come to a halt due to the terror. "They use schools as weapon warehouses in Varto, Silvan, Cizre and Silopi. How will children go there and study? Teachers and medical staff that are working there… Each one of them is a hero," he added. He also assured that the lost time will be made up for.

Davutoğlu also explained the operations launched in urban areas. Underlining that an operation has three phases, Davutoğlu said: "First, there are the preparations prior to the operation. Second, the operation and three, after the operation." He assured that the order will be provided in the districts following the operations either by means of police stations or new security units.
Last Update: Dec 17, 2015 10:06 am
RELATED TOPICS