US, Turkey agree on rules for future American air patrol missions near Syria 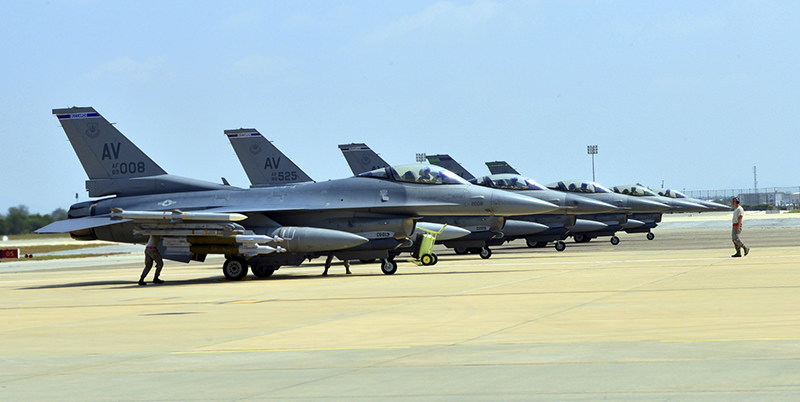 Six U.S. Air Force F-16 Fighting Falcons from Aviano Air Base, Italy, are seen at Incirlik Air Base, Turkey, after being deployed, in this U.S. Air Force handout picture taken August 9, 2015.(Reuters Photo)
by Ragıp Soylu Dec 17, 2015 12:00 am
The United States has reached a bilateral agreement with Turkey over the rules for combat air patrol missions in Turkish airspace for future American aircraft deployments, a Pentagon spokesperson told Daily Sabah. However, the U.S. decided yesterday to pull back six F-15C aircraft from Turkey which were supposed to undertake these symbolic missions against Russian air incursions near the Syrian border.

The warplanes had been deployed in November in response to a request from Ankara for a demonstration of NATO's ability to rapidly transfer U.S. assets to Turkey in support of an air defense mission.

Pentagon spokesperson Laura Seal downplayed the significance of the aircrafts' withdrawal from Incirlik Air Base. She said the "enduring" agreement reached by Turkey and the United States provides a framework for U.S. aircraft to support Turkey when called upon in the future. "Six F-15Es joined our manned and remotely piloted aircraft already conducting counter-ISIL missions from Incirlik alongside Turkish F-16s. Counter-ISIL operations from Incirlik and other operating locations continue," she added, using an alternative acronym for Daesh.

Twelve F-15s will depart Turkey for the United Kingdom by the end of the week. A dozen A-10s as well as a number of drones are currently conducting counter-Daesh missions from Incirlik. Seal said an increase in coalition aircraft operating from the air base is expected in the coming months.

When asked about the danger posed by Russian aircraft against Turkish airspace, she replied that Turkey is fully capable of patrolling its own airspace and American F-15Cs were always intended to be for short duration.

Turkey's downing of the Russian jet last month increased the importance of American patrol missions along the Syrian border but some officials have previously hinted that the United States did not want to be a part of an escalation especially while top U.S. diplomat John Kerry is seeking a Syrian settlement with the Russians.

Regional powers, such as Israel, are also disturbed by Russia's recent deployment of S-400 air defense missile systems in Syria's Latakia as they can easily shoot down Turkish airplanes near the border. However, some American commanders such as Col. Sean McCarthy, commander of the 447th Air Expeditionary Group based at Incirlik Air Base, are not intimidated by the Russian missiles. "I don't lose any sleep over what they are doing with their surface-to-air missile systems," McCarthy said.
Last Update: Dec 17, 2015 4:26 pm
RELATED TOPICS