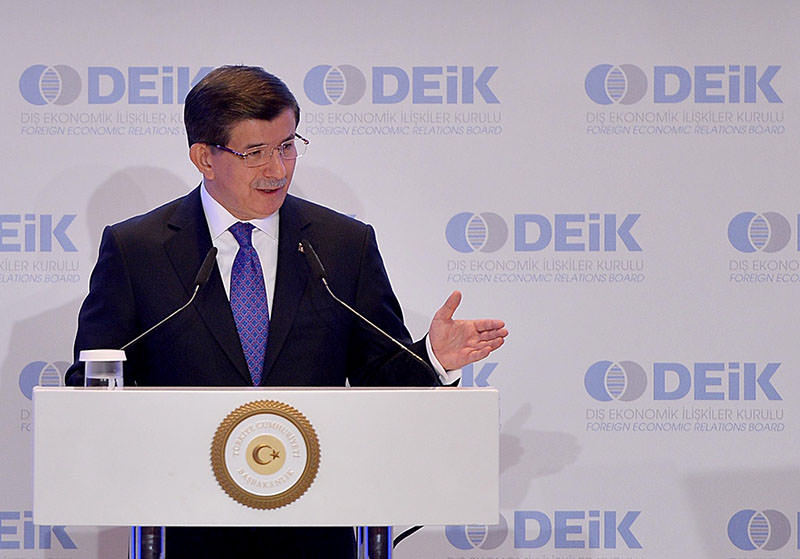 | AA photo
by Daily Sabah Dec 19, 2015 12:00 am
Prime Minister Ahmet Davutoğlu said on Saturday that People's Democratic Party (HDP) is acting as if they are the spokesperson for the PKK terrorists, during a meeting held by the Foreign Economic Relations Boards (DEİK) in Istanbul.

He said, HDP should stand against terror activities [of the PKK] in the southeastern Turkey, should say "stop" to the terrorists' actions which are hindering pupils from getting their right of education and leading people to leave their houses, but instead the party was giving support to these terrorist, saying "We will extend the struggle."

"The name of this politics is provocation, chaos, blood, and terror," the prime minister said, who assured the public that Turkey would not step back from democracy and justice.

Davutoğlu also added a series of measures will be taken to compensate citizens who have been victims of recent terror activities and have been forced to flee their homes. PM added that an order has been given ministers to compansate businesses for the damages and added that the students who are missing classes will have extra class time arranged during summer holidays.

Prime Minister Davutoğlu's criticism came upon Peoples' Democratic Party (HDP) co-Chair Selahattin Demirtaş's call on Friday for "resistance" against the operations conducted by the security forces against the PKK terrorists. Demirtaş had made a similar call in October 2014, which had lead to a series of violent demonstrations that resulted in the killings of more than 50 citizens.

The government has voiced repeatedly concern regarding the relationship between HDP and the PKK, calling the political party to put a distance between PKK and HDP.

The Turkish government has intensified its counterterror operations following the recent attacks carried out by the PKK, which is recognized as a terrorist organization by the U.S., EU and Turkey.

'Strong political will to restore relations with Russia'

Meanwhile, PM Davutoğlu also touched upon the current relations between Russia and Turkey, which have been strained following the downing of a Russian warplane that violated Turkey's airspace near the Syrian border on Nov. 24. Russia has since then announced a range of sanctions against Turkey.

Davutoğlu said that Turkey has put forward strong political will to reestablish relations with Russia and is ready to talk with them but will not let the country dictate anything on Turkey. "We are ready to talk to Russia and to exchange every type of opinion," Davutoğlu said and added that when Turkey shot down the Russian jet, it was defending its own territory, and that was Turkey's "utmost right".

Davutoğlu said, Turkey is not a country that would fall into difficulty with Russia's recent sanctions. He said, "We also take our own precautions, doing alternative plans. Everything has a solution. We are prepared for every situation."

Prime minister underscored Turkey's position against Russia's annexation of Crimea and said that Turkey will not recognize Russian invasion [2014] of Crimea.

President Vladimir Putin, during a press conference on Thursday in Moscow, said that he did not see any prospect of ties improving with Turkey.

Putin also accused the Turkish government of "Islamizing Turkey" and cooperating with Daesh over oil trade in Syria.

Davutoğlu condemned Putin's recent attitude against Turkey, stating that "it did not suit a statesman".

"Didn't Mr. Putin know that we are a Muslim country, a month ago? When he met with our president at the G20 summit in Antalya a month ago, didn't he know about Turkey's foreign policy? If Turkey was cooperating with Daesh [as he claimed], why wouldn't he mention it at that time?"

Davutoğlu has also on Thursday touched upon the recent deployment of 150 Turkish soldiers in Daesh-held Mosul province in Northern Iraq. The prime minister said, Turkish soldiers will continue to provide training for Iraqi soldiers until Mosul is freed from Daesh terrorists.

On December 4, 150 Turkish soldiers equipped with heavy weapons arrived on the outskirts of Mosul province to train forces, while Baghdad demanded the withdrawal of soldiers.

Turkey said the 150 soldiers and up to 25 tanks were stationed at Bashiqa Camp to protect servicemen training Iraqi volunteers to fight Daesh.
The Turkish training mission has been in operation in the region since March and is not assigned combat duties.

The White House said on Friday that U.S. President Obama held a phone conversation with President Erdoğan to discuss the current dispute between Turkey and Iraq, during which Obama asked Erdoğan to take additional steps to deescalate tensions with Iraq and step up the withdrawal of Turkish military forces from Northern Iraq.
Last Update: Dec 19, 2015 3:39 pm
RELATED TOPICS