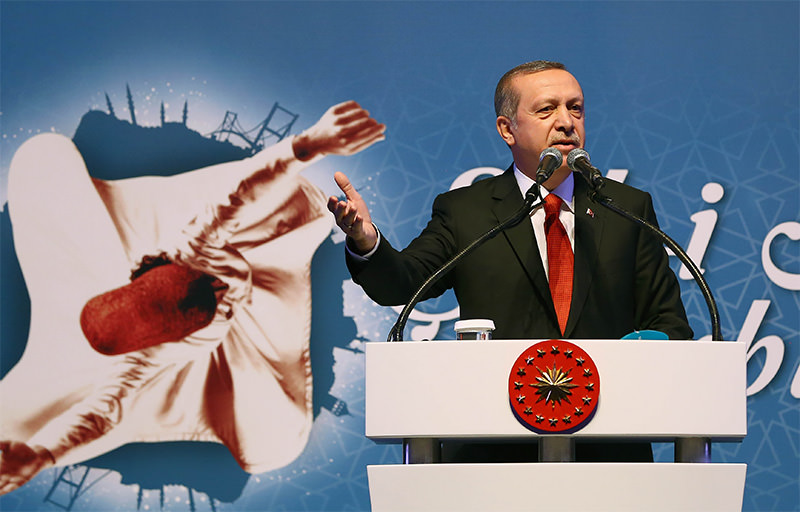 |AA Photo
by Rahmi Osman Kaçmaz Dec 19, 2015 12:00 am
President Recep Tayyip Erdoğan said that hundreds of thousands of innocent muslims are killed with the excuse of fighting against Daesh, a terror organization that fights Muslims with Islamic motives and symbols.

President Erdoğan spoke during the Şeb-i Arus ceremony, which commemorates the 742nd anniversary of Rumi's death, on late Saturday.

Erdoğan said that innocent Muslims are primarily targeted during the attacks that allegedly target Daesh.

"A country targets Daesh in only 10% of their airstrikes; and Turkmens in the remaining 90%, along with other Muslims opposing the Syrian regime," said Erdoğan referring to Russia.

He urged for an end to 'lies' about the airstrikes.

Erdoğan also said that the ongoing power struggle branded as a fight against Daesh has become 'a tragicomedy.'

"It resembles a theatre play, everyone plays a role. Everyone tries to steal roles. But the people who die are real. The dying babies, children, women and elder people are real. The houses, schools, places of worship, historical artifacts are real," he said.

Erdoğan said that Daesh, which is a tool of misuse, has to be eliminated as fast as possible and that Turkey will continue to fight against it with all its power.
Last Update: Dec 20, 2015 10:55 am
RELATED TOPICS