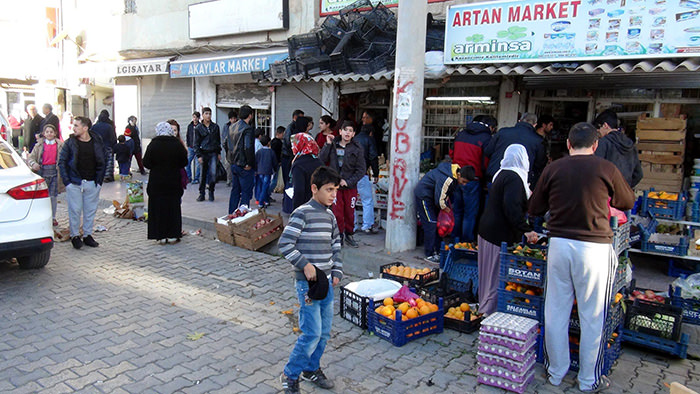 |DHA Photo
by Daily Sabah Dec 24, 2015 12:00 am
There appears to be no end in sight to the sweep out operation against the PKK's urban branch as locals in the district of Sur in Turkey's Diyarbakır province express their full support for anti-terror operations. Meanwhile, the curfew imposed in the Nusaybin district of Mardin was lifted early on Thursday.

Citizens who asked for military assistance in the district of Sur have been evacuated from the war-torn areas and secured in shelters. Expressing their exasperation over the presence of PKK terrorists in heavily populated areas, locals spoke to the state-run Anadolu news agency (AA): "Kids who are 14 or 15 years of age wore masks and used to slap us. Where have you been until now? You have arrived although you are late. Continue these operations for God's sake. Save us from this dirt."

Another citizen also shared his sense of shock for the terrorists as they vandalize the homes of residents and historic sites in urban areas. "I have been living here for 59 years. I wish I had died and not experienced what I've been through in these last five years. Who are these men? They cannot be from here [Turkey]. The men here used to be decent. Where did these men come from? They are not Kurds. They have burnt down our mosques and homes," he said.

Late on Wednesday the PKK terrorists opened fire on a residence in the Dargeçit district of Turkey's Mardin province, killing two people and wounding two others.

The house reportedly belonged to a member of the Justice and Development Party (AK Party), identified as the provincial head of Dargeçit, Mr. Beşir Kılınç. Kılınç and his daughter died in the attack but two of Kılınç's relatives survived.

The incident is the latest in a string of attacks on civilians by the PKK. The terrorist organization also target civilians as they try to run for their lives amidst the heavy clashes between local security forces and the PKK.

On Tuesday, terrorists opened fire on some 300 local residents with rifles and rocket launchers in the town of Şırnak. Residents were reportedly trying to flee the region when they were attacked. Security forces intervened and sheltered the locals inside of a gym, media outlets reported.

VICTIMS OF PKK TERROR INCLUDE MORE THAN 115,000 STUDENTS

Curfews are still in effect in several southeastern districts of Turkey making it impossible for students to continue their educational studies. According to the latest statistics, more than 115,000 students enrolled in 255 schools across the southeast are affected by PKK terror and unable to safely attend school.

While the imposed curfews make it impossible for students to continue their studies,, the PKK has set many schools on fire in recent weeks. The terrorists targeted schools in the districts of Sur, Bağlar, Cizre and Silopi and opened fire on firefighters and security forces as they try to control the scene and put out fires.

The time that students in the region have lost will be made up at a later date, according to reports.
Last Update: Dec 24, 2015 4:01 pm
RELATED TOPICS