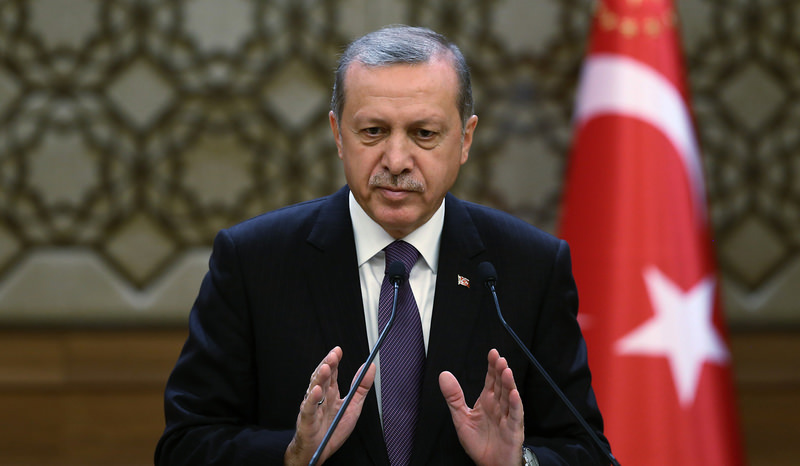 by Daily Sabah with Reuters Jan 01, 2016 12:00 am
The Turkish Presidency released a statement on Friday, in which it said that President Recep Tayyip Erdoğan's comments on Hitler's Germany were taken out of context and twisted.

Asked on his return from a visit to Saudi Arabia late on Thursday whether an executive presidency was possible in Turkey while maintaining the unitary structure of the state, Erdoğan said: "There are already examples in the world. You can see it when you look at Hitler's Germany.

"There are later examples in various other countries," he told reporters, according to a recording broadcast by the Doğan news agency.

Erdoğan wants to change the Turkish constitution to turn the ceremonial role of president into that of a chief executive, a Turkish version of the system in the United States, France or Russia.

The current constitution has remained in force since 1982 but several amendments have been made to it since then as it carries traces of the military takeover in 1980.

"Erdoğan's 'Hitler's Germany' metaphor has been distorted by some news sources and has been used in the opposite sense," the presidency said in a statement.

It said his comments were meant to demonstrate that an executive presidency can exist in a unitary state and does not depend on a federal system of government, and that neither a presidential nor parliamentary system is a guarantee against 'abuse of power.'

"If the system is abused it may lead to bad management resulting in disasters as in Hitler's Germany ... The important thing is to pursue fair management that serves the nation," the statement said, adding it was unacceptable to suggest Erdoğan was casting Hitler's Germany in a positive light.

Erdoğan had also pointed out 'the principle of justice' and peoples' expectations were essential to both the parliamentary and the presidential system in his speech, the statement further added.

"Despite the points President Erdoğan has emphasized, some media outlets attempted to show Erdoğan as if he was citing Hitler's Germany as an example of an effective presidential system. This kind of attitude conflicts with the objectivity and honesty principles of journalism."

"No such example has been given by President Erdoğan, who recognizes Islamophobia, anti-Semitism and the Holocaust as a crime against humanity. Twisting Erdoğan's words as if they were a positive reference to the Hitler constitution is unacceptable." the statement read.