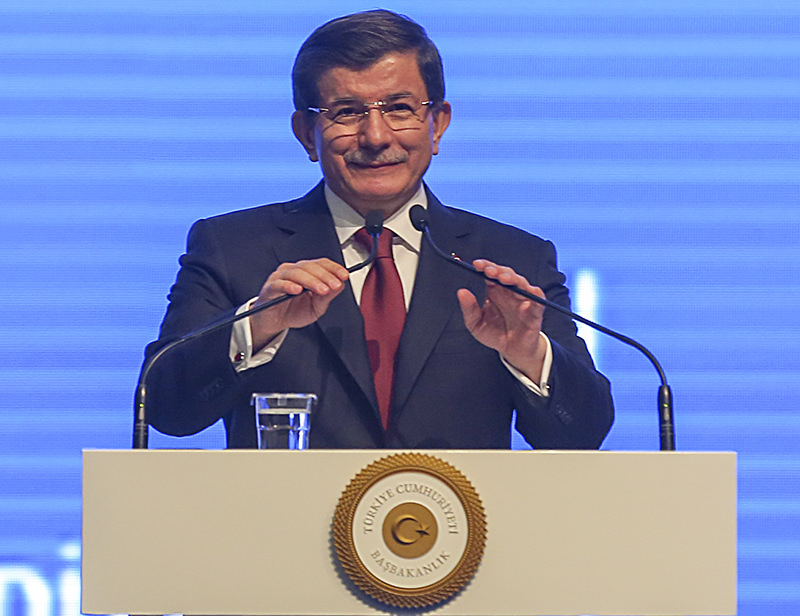 | AA Photo
by daily sabah Jan 06, 2016 12:00 am
Prime Minister Ahmet Davutoğlu on Wednesday said that the United Nations and European Union were responsible for the deaths of refugees in the Mediterranean, and criticized them for remaining silent amid the refugee crisis, while he harshly criticized Russia for vetoing everything at the U.N. regarding Syria.

Speaking at a conference in Ankara, Davutoğlu noted that Turkey has opened its doors to everyone seeking refuge, and did not remain silent to the suffering of the Syrian people.

"The world is silent, there are only photos which hit the headlines" Davutoğlu said, and added that Turkey will continue to make all sorts of sacrifices for the oppressed.

"We will continue to stand up for the rights of our brothers and sisters in all platforms" he said.

Davutoğlu also noted that his party will carry out all of the election pledges within the next three months and underscored that since November 1, AK Party has carried out 30 percent of their election pledges.

The Prime Minister harshly criticized municipalities administered by the Peoples' Democratic Party (HDP), which he noted do not spend the funds given to them for providing services to the people.

"Over 67 percent of Mardin municipality's expenditures are spent on staff" he said, and added that the municipality spends only 7 percent on new projects, whereas this figure is around 47 percent for other municipalities. He underscored that the government will closely follow how such municipalities, including the ones in Diyarbakır, Van and Şırnak spend their budget.

Davutoğlu noted that these municipalities do not provide services to the citizens, but instead dig ditches and erect barriers for the PKK terrorists, with the aim to establish so-called self-rule.

"They even provide vehicles for the terrorists" Davutoğlu said, and added that such officials will be taken to account.