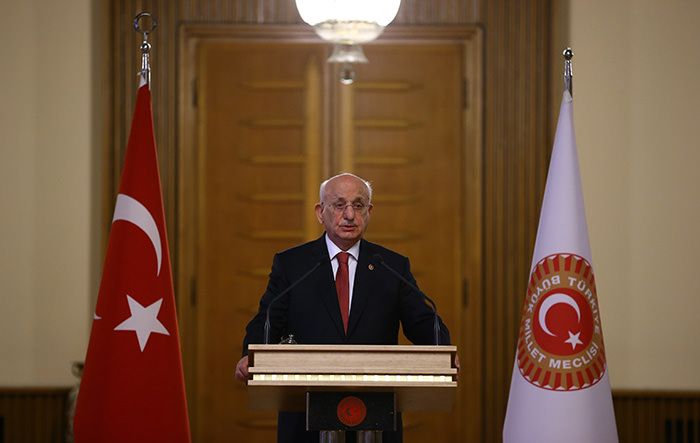 by Daily Sabah with AA Jan 08, 2016 12:00 am
On Friday, Turkish Parliament Speaker İsmail Kahraman called for the establishment of a committee to draft a new Turkish constitution to replace the 34-year-old Turkish Constitution, written at a time when Turkey was under the rule of a military tutelage.

Speaker İsmail Kahraman's remarks came during a press conference and were made after abroad consensus was reached among political parties: that Turkey's constitution needed revision.

Kahraman said that the proposed constitutional committee will be comprised of three deputies from each party, similar to the previous committees, adding that he would head the committee which would form its own rules and procedures.

Kahraman said it wasn't yet clear whether the new committee would be built on the experiences of the former committee or be started from scratch, adding that he considered the old committee to be a failure.

Kahraman added that Turkey is clearly having difficulties with the existing system. "One way or another, this system should be revised," he said.

In 2013, Turkey's parliamentary parties formed a commission to revise the constitution introduced in 1982, following a military coup led by Gen. Kenan Evren, which seized power in 1980. The commission reached an agreement on only 60 articles before it was disbanded.

The ruling AK Party aims to replace the current parliamentary system with a presidential model under a proposed new constitution. However, opposition parties have made it clear that they support a parliamentary system.
Last Update: Jan 08, 2016 7:10 pm
RELATED TOPICS