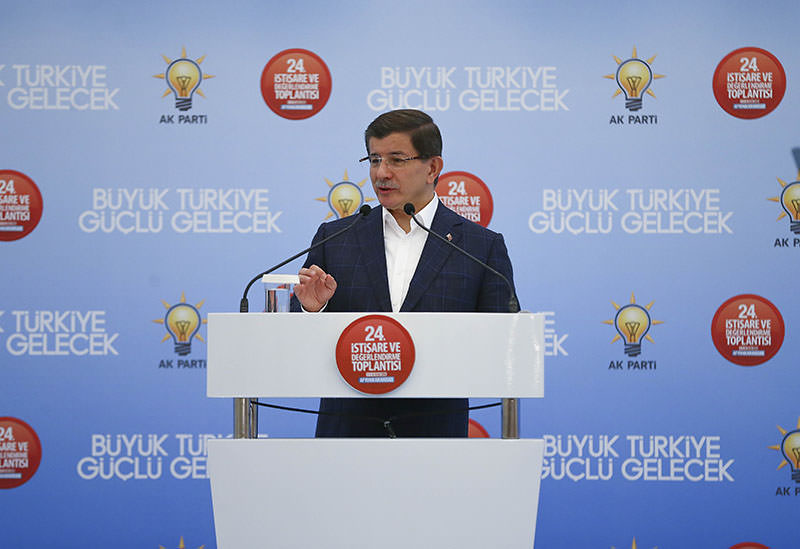 | AA photo
by daily sabah Jan 10, 2016 12:00 am
Prime Minister Ahmet Davutoğlu said on Sunday that municipalities in southeastern Turkey are using funds to help the PKK terrorist organization, instead of building infrastructure in the region. PM Davutoğlu made the comments during a closing speech of the ruling Justice and Development (AK) Party's 24th Advisory and Assessment camp held at a hotel in the western city of Afyonkarahisar.

Most of the municipalities in the southeastern Turkey are run by the Democratic Regions Party (DBP), the sister party of the Peoples' Democratic Party (HDP). Recently, there have been many reports that the municipalities administrated by the DBP provide assistance to the PKK by digging trenches and establishing roadblocks to claim control over cities.

PM Davutoğlu said that the DBP-run municipalities did not turn their funds into investments, which is essential to secure peace and tranquility in the region. The prime minister said, these municipalities would give an account for these funds.

Davutoğlu said, the southeastern metropolitan municipality of Diyarbakır could not generate its own funds and had to receive 83.5 percent of its annual budget from the state. He said, of these funds, only 20 percent was allocated to investment, whereas 75 percent was on hold.

The southeastern Hakkari metropolitan municipality, on the other hand, received 79.3 percent of its annual budget from the state, with 52.6 percent of its expenditures going to salaries, the prime minister stated.

"They are trying to transfer funds -in the guise of personnel salaries- to those digging ditches and producing nothing but terror activities.

"Hakkari is the city that needs the most investment of all, and as the centralized management, we send all the funds, but they are not using them for investment," he said.

Davutoğlu also touched upon some media reports' claims that there was a time limit for terror operations ongoing in the southeastern Turkey. The prime minister said, "There is no such time limit", and the operations would continue until atmosphere of peace is ensured in the region.