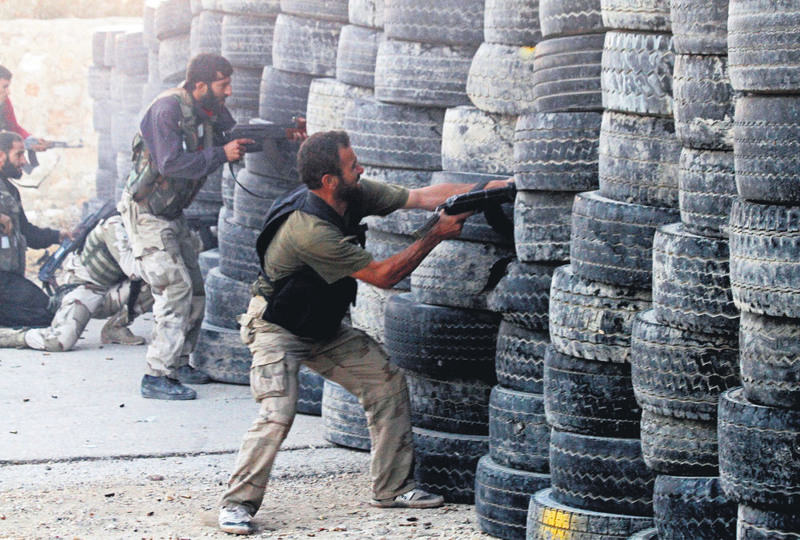 by daily sabah Jan 12, 2016 12:00 am
Opposition groups in Syria continue to make progress against Daesh in northern Aleppo, seizing control of four villages with 1,200 men and reportedly aiming to continue on to Jarabulus, something the PKK-affiliated Democratic Union Party (PYD) is also trying to do. The opposition groups, including the Turkmen Liwa Sultan Murad Brigade, Shamiya Front and the Sham Legion, have taken the upper hand in the villages of Kara Kobri, Kharaba, Qarah Mazrah and Khuzul. The Turkish Armed Forces (TSK) provided support for the offensive by targeting Daesh positions with howitzers and tanks along with anti-Daesh coalition aircraft.

The groups have said that two militants were killed and eight wounded while 60 militants from Daesh were killed.

Local sources say that the PYD heading toward Afrin from Manbij raises concerns in opposition lines, which had to fight with the PYD's Russia-backed People's Protection Units (YPG), which seeks to take the control of 24 villages located around Jarabulus. The operations will reportedly extend toward central Syria and Marea.

They say the PYD's desire to control the area between Jarabulus and Azaz to connecting the Kobani and Afrin cantons threatens the 400,000 Turkmens there. Turkmen officials indicate that the PYD is aiming to enter Jarabulus after recently seizing the Tishrin Dam from Daesh.

"It has already been documented previously by international reports that the PYD has committed war crimes and violated human rights. They will do the same on the Azaz-Jarabulus line. We have to defend our lands at all costs," Abdurrahman Mustafa, head of the Syrian Turkmen Assembly said on Dec. 29.

On Jan. 4, the YPG seized the village of Kishtiar north of Aleppo with Russian air support after clashes with opposition groups. Kishtiar, located 10 kilometers south of the town of Azaz and 17 kilometers from the Turkish border, was previously taken from the PYD by rebel groups in November.

Sources indicate that Russian aircraft launched strikes on opposition groups around the village. Some rebel groups there fight the YPG and also conduct offensives in several towns and villages in northern Aleppo. The Syrian Observatory for Human Rights, a Britain-based monitoring group, confirmed the recent offensives and Russian air support.

The area has seen heavy fighting in recent weeks. It is strategically important to both sides as it marks the border between the isolated PYD canton of Afrin and the thin strip of land connecting the opposition-held eastern half of Aleppo to the Turkish border.

Civilians in the region face a rising threat from the PYD, since the YPG has consecutively gained control of villages around Azaz, including Tinib, Shewarxa and Malikiyah. Russia, in cooperation with the YPG and supporting Syrian President Bashar Assad in the field, says its operations in Syria target Daesh, but it has been bombing opposition groups that also fight the terrorist organization.
RELATED TOPICS