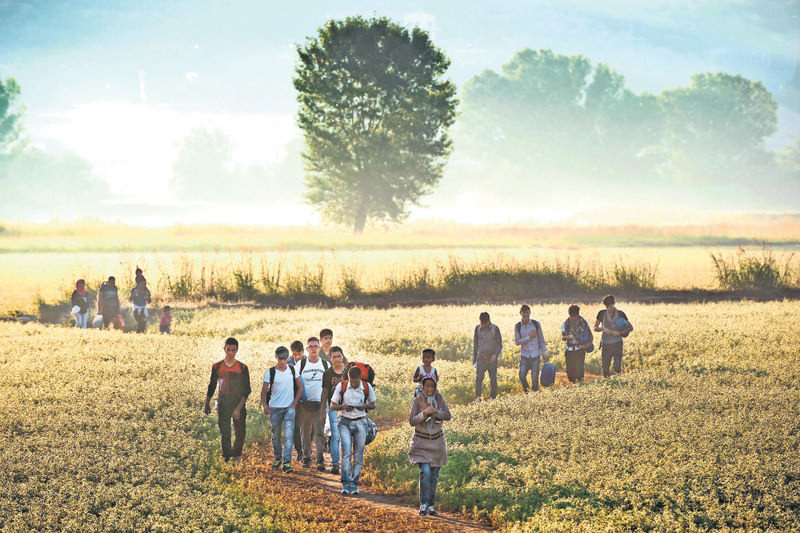 German Development Minister Müller expressed his full support for Turkey and praised its efforts in the refugee crisis. He also urged the European Union to keep its promise to Ankara if it wants any resolution

As the European Union feigns concern for the influx of refugees still entering the EU zone on a daily basis and criticizes Turkey at the same time, the 28-nation EU bloc has been called on by German Chancellor Angela Merkel and German Economic Cooperation and Development Minister Gerd Müller to keep its promises to Turkey. "Turkey does a great job of taking in Syrian refugees," German Minister Müller said in an interview with a German daily on Sunday, adding that Turkey has reached its capacity in hosting more refugees. Amid harsh criticism from other EU countries which criticize Ankara officials for allegedly not doing enough to prevent refugees from entering the EU zone by sea, Turkey's efforts received recognition and appreciation from Germany.

"Turkey needs our support," Müller said, adding that "Now, EU member states have to keep their promises." Touching on the promises of financial aid to Ankara, Müller said, "The 3-billion-euros in aid that was pledged in November is still not at [Turkey's] disposal." Turkey and the EU reached a deal on Nov. 29 which indicated that Ankara would be provided with financial aid to spend on the costs of refugees. However, the financial aid has still not been received by the Turkish government. Müller's statements came only a day after Merkel praised Turkey's efforts in tackling the refugee crisis.

Speaking at a reception in Mainz, Merkel praised Turkey's efforts in welcoming and sheltering refugees, saying, "Turkey has accepted more than 2 million refugees. Well, what has the European Union, which has a population of more than 500 million, done?"

The chancellor also underscored the issue of pledged financial aid to Ankara. Stressing that the EU did the right thing by providing financial aid to Turkey, Merkel said, "[We] will continue to aid hereafter as well."

Merkel went on to criticize the 28-nation bloc, levying harsh criticism on the EU for failing to find a resolution to the crisis. Merkel urged member states to "do their homework."

"I think we, as Europeans, should do our homework so fast that we can demand the same from Turkey," Merkel said, expressing her dissatisfaction with EU member states.

As the most influential and powerful figure in the EU, Merkel's calls on the 28-nation bloc to "do their homework" before expecting Turkey to deliver more were reiterated by the vice president of the European Commission Frans Timmermans who announced on Monday that the migrant flow is "still way too high."

Speaking at a joint press conference in Ankara on Monday with Turkish EU Minister Volkan Bozkır, Timmermans said: "The numbers are still way too high in Greece; between 2,000 and 3,000 people [are arriving] every day. We cannot be satisfied at this stage."

Timmermans' statement is in stark contrast to that of Merkel. While the vice president leveraged blame on Ankara for not making more efforts to curb the flow of refugees, Merkel called on the EU to lend a hand to Turkey.

As Timmermans was bashing Turkey, Minister Bozkır underlined that the legalization of the perilous journeys taken by thousands of refugees is necessary, urging that humanitarian quotas be put on refugees who aim to settle in European countries.

"As Turkey, we are exerting significant efforts. The number of detainees on illegal migration charges has reached 150,000 which is as twice many as the last year. Nearly 500 refugees are detained by the relevant institutions on a daily basis," Bozkır added.

Speaking to Daily Sabah, Kemal Öztürk, a columnist for Yeni Şafak daily, took a dim view of the Turkey-EU deal that was agreed to on Nov. 29 and criticized the EU for its policies "just to salvage the day."

"Turkey wants to resolve the situation at its roots while the EU fails because of its lack of policy. Syria, Iraq, Libya, Egypt and Lebanon, these countries create more and more refugees. Turkey wants to sort the crisis out by solving the Syrian issue," Öztürk said, adding that it is impossible to end the problems unless the EU produces radical and effective policies.

Asserting that Turkey is not to blame for this tragedy, Öztürk contended that the deal between Ankara and the EU will not work out because "the EU will not deliver the financial aid that it pledged." "[German Chancellor Angela] Merkel is all about rhetoric. The EU and Germany do not want to take risks and become a leader," he said.

Öztürk also warned the 28-nation bloc, saying: "The crisis will further continue. Turkey is not the EU's gendarmerie or coast guard."
RELATED TOPICS