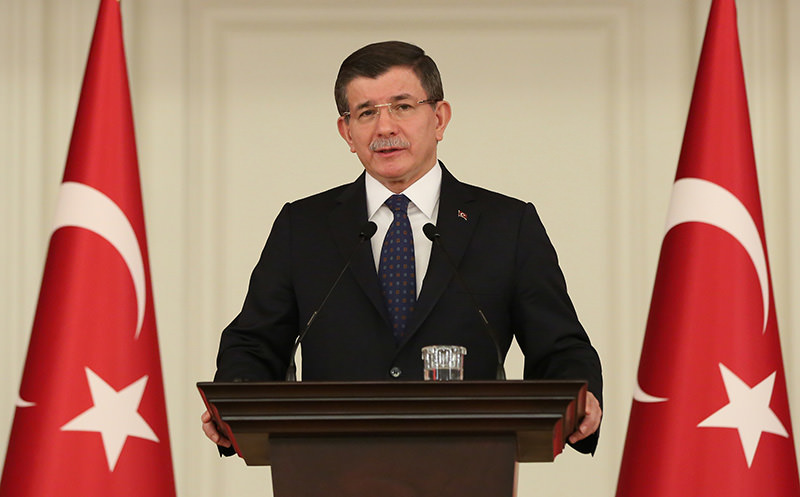 | Sabah Photo
by Nurbanu Kızıl Jan 14, 2016 12:00 am
Prime Minister Ahmet Davutoğlu said on Thursday that Turkey struck Daesh targets along the border with Syria and Iraq, and killed 200 terrorists, in retaliation for the deadly suicide attack in Istanbul, which killed 10 people.

Speaking to Turkey's ambassadors at Çankaya Palace, Davutoğlu underscored that Turkey will continue to fight terrorism in a determined manner and urged everyone to display a determined stance against terrorism.

Davutoğlu said that the military was given orders to carry out operations against Daesh targets in Iraq and Syria, shortly after they confirmed that the attack was carried out by the terrorist organization. He noted that around 500 artillery rounds were fired at Daesh positions in the last 48 hours, killing 200 terrorists in total, including so-called regional chiefs.

"From now on, any threat directed against Turkey's guests will be retaliated in kind" Davutoğlu said, and added that Turkey will continue to fight the terrorist organization until they completely leave Turkey's borders.

He condemned terrorism once again, while he underscored that it is important to differentiate between ordinary Syrian refugees and Daesh.

A day earlier, Davutoğlu had said that the suicide bomber entered Turkey from Syria as a refugee fleeing Daesh persecution, and his movements were not monitored as he was not on watch list.

Davutoğlu also criticized identity-based politics and the recent initiative where a group of academics came together to condemn the anti-terror operations conducted against the PKK in southeastern Turkey as 'massacre.'

The declaration signed by over 1,000 academics urged the government to stop its anti-terror operations and lift the curfew.

"All of our citizens are equal" Davutoğlu said, and underscored that nobody should discuss 'ethnicity-based alternative politics.' He underscored that such policies are divisive and called on the academics to express their views within a lawful framework, rather than standing on the side of terrorists.

The prime minister underlined that Turkey will eliminate the PKK terrorists, who force people in the southeast to migrate and threaten the peace of the public.