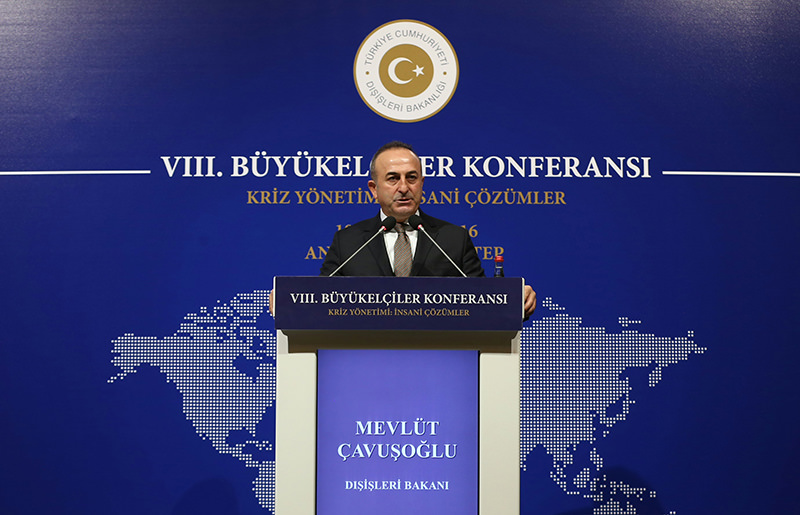 | AA Photo
by Merve Aydoğan Jan 15, 2016 12:00 am
As the eighth annual Ambassadors' Conference ended its program in Ankara on Friday and continued on to refugee camp visits in the southeastern province of Gaziantep, Foreign Minister Mevlüt Çavuşoğlu held a press briefing on Friday and stressed that counterterror operations will continue against DAESH. Regarding the recent detention of 12 academics working at the University of Kocaeli (KU) on charges of "explicitly insulting the Turkish nation, Turkish Republic, Parliament, Turkish government and judicial organs" as well as "conducting terror propaganda," Çavuşoğlu harshly criticized the academics and said that they signed the petition to be labeled intellectuals.

Providing information on the conference, Çavuşoğlu said that 34 sessions were held under the theme "Crisis Management: Humanitarian Solutions" where ambassadors and the minister assessed solutions to the humanitarian crisis and its reflection, especially throughout the region. "To have a more successful conference, we held panels with academics and expert speakers from around the world. During our meetings in Ankara, four deputy prime ministers and eight ministers addressed the attendees," Çavuşoğlu said.

With the ongoing deadly terror attacks by the PKK throughout eastern and southeastern provinces, Çavuşoğlu said Turkey is going through a very sensitive period. Regarding the academics that signed a petition calling for an end of violence in the southeast, Çavuşoğlu said: "Have you ever displayed solidarity for those security officers and babies who lost their lives so far? They are displaying solidarity for a terrorist organization that has murdered babies and call it freedom of expression. Where in the world is supporting terror and having solidarity with them defined as freedom of expression?" Çavuşoğlu said. He continued to criticize the academics, and said: "As the PKK is currently on the terrorist organizations lists of the EU, U.S. and other countries around the world, I [do not] accept solidarity with a terrorist organization just to look like an intellectual and do not perceive it as freedom of expression."

About the recent operations against DAESH in which more than 200 militants were reportedly killed, Çavuşoğlu reiterated that both Turkey and the U.S.-led coalition's intense, active combat against DAESH will continue. Commenting on the recent Sultanahmet Square suicide bombing, he confirmed the questioning of seven suspects and that the investigation is ongoing.