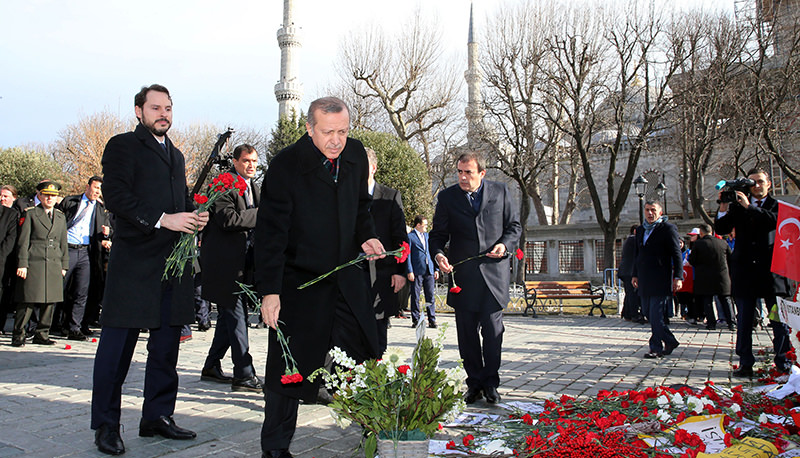 President Recep Tayyip Erdou011fan leaving carnations at the scene of the deadly blast, which claimed 10 lives in Istanbul, January 15,2015 (AA Photo)
by Daily Sabah with AA Jan 15, 2016 12:00 am
President Recep Tayyip Erdoğan has attended Friday prayers at Sultanahmet mosque, and left carnations at the scene of the blast, after Tuesday's suicide bomb attack in Istanbul.

Mehmet Görmez, the head of Turkey's Directorate of Religious Affairs, led the prayers attended by hundreds of Istanbulites.

"There have been 10 attacks by Daesh against Turkey so far. Our combat against any terrorist organization, especially the PKK and Daesh, will continue resolutely," Erdoğan told reporters after the prayers.

Erdoğan said the attack was being investigated in a multi-directional way. "The presence of Daesh in Turkey is not acceptable," he added.

Accompanied by Interior Minister Efkan Ala, Erdoğan also visited the scene of the deadly suicide attack in Sultanahmet square.

A blast at the district on Tuesday morning killed 10 people-mostly German tourists-and wounded 15 others.

A Syrian suicide bomber carried out the attack, Erdoğan said on Tuesday while Turkish Prime Minister Ahmet Davutoğlu told reporters on Wednesday that the police identified the suicide bomber.

Davutoğlu said that the bomber had Daesh links, adding: "Police were not in pursuit of the bomber. He had come to Turkey as an ordinary refugee. However, after the attack, all his contacts were brought out."

Within the scope of the ongoing investigations, police detained a total of seven suspects in connection with Tuesday's Istanbul suicide bomb attack, a Turkish minister said on Thursday.

Turkey has retaliated by carrying out operations against Daesh targets in Iraq and Syria, shortly after the military confirmed that the attack was carried out by the terrorist organization.Prime Minister Ahmet Davutoğlu noted on Thursday that around 500 artillery rounds were fired at Daesh positions in the last 48 hours, killing 200 terrorists in total, including so-called regional chiefs.