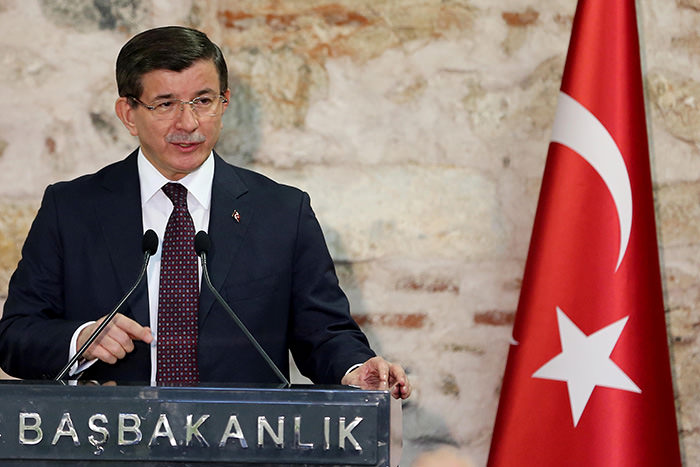 by Mehmet Çelik Jan 15, 2016 12:00 am
Prime Minister Ahmet Davutoğlu criticized on Friday the academics who signed a declaration describing security operations against PKK terrorists in the country's southeast as "massacre".

The prime minister said the academics' action justifies the PKK's activities in the region and normalizes the Qandil's [the HQ of the group] ideology. Davutoğlu made the comments during a meeting in Dolmabahçe Palace in Istanbul with the members of Higher Education Institution (YÖK).

Davutoğlu underscored the importance of freedom speech but reiterated the necessity of stance against terrorism.

"Everyone has the right to defend an idea, but they cannot justify terrorism and hate within context of freedom of speech," he said.

"Academics who signed the petition are justifying the construction of barricades by PKK terrorists [in the southeast]," Davutoğlu added.

In the petition, 1,128 academics working in various universities across the Turkey, has called for an end to the security forces' ongoing counter-terrorism operations [in southeast] amid curfews, accusing the state of violating human rights and of conducting a "deliberate and planned massacre. The figures call themselves as the 'Group of Academics for Peace.'

Amid reports of some academics signing the declaration without reading it, Davutoğlu urged them to re-read the declaration and re-evaluate it. "Those who signed the declaration are treating the construction of barricades as a legitimate action and those who built them [PKK terrorists] as innocent," the premier said.

The declaration is biased and one sided, the prime minister said and added: "Why do you [academics] paint a one-sided picture on your minds? There is a terror organization [PKK] that kills babies and children in Turkey."

"There is no Ecrin in this declaration nor Efe. If this declaration is true, then the state also killed these children" Davutoğlu said, referring to the names of the babies killed by PKK terrorists in recent attacks and accusing the declaration of ignoring the PKK attacks on civilians.

Meanwhile, President Recep Tayyip Erdoğan on Friday also touched upon this issue, saying: "Those standing by the perpetrators of the massacres are a party to the crime." The president made the comments after attending Friday prayers at Sultanahmet mosque and leaving carnations at the scene of Istanbul suicide bombing.

PKK terrorists attacked the police department in the Çınar district of southeastern Diyarbakır province on Wednesday. In the attack carried out with a bomb-laden vehicle, rocket launchers and long-barreled rifles; five civilians, three of them children, and one policeman were killed and 39 others, including six policemen, were injured.

Formed in 1978, the PKK has been fighting Ankara for an independent state until the early 2000s. The group then shifted its goal to autonomy in predominately Kurdish inhabited regions of Turkey. The PKK, which the U.S. and EU also consider a terrorist organization, resumed its 30-year armed campaign against the Turkish state in late July following a two-year ceasefire.