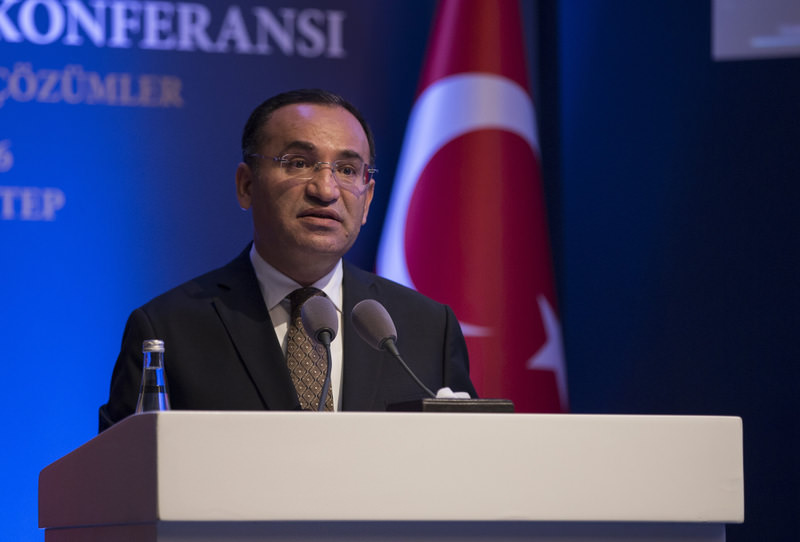 by Merve Aydoğan Jan 15, 2016 12:00 am
With the Foreign Ministry's eighth annual Ambassadors Conference in Ankara having entered its fifth day, Reform Action Group (RAG) officials, including Deputy Prime Minister Lütfi Elvan, Justice Minister Bekir Bozdağ, Interior Minister Efkan Ala and EU Minister Volkan Bozkır addressed the ambassadors on Thursday. The ministers jointly condemned terrorism and the recently conducted suicide bombing in Istanbul and car bombing in Diyarbakır, and Ala said that terror is the main obstacle against the humanity. Foreign Minister Mevlüt Çavuşoğlu, who moderated the session with the four ministers, began by also condemning terror and urged the EU to keep its promise. Çavuşoğlu said: "We are taking all necessary measures and expecting the EU to also keep its promise. We do not want the EU to perceive our relations in a conjectural way, but rather want the approaching period to be considered on the basis outcome." Elvan and Bozdağ both drew attention to the protection of the Personal Data Law, which Elvan announced had been finalized and will be conveyed to Parliament in the coming week.

Concerning domestic and international terrorism, Ala said: "All the conflicts prove that the approaching years will be based on combating terror for powerful countries. The major obstacle and most significant problem for humanity in the next decade will be combating terror globally. So we must be very sensitive on this issue." Noting that Turkey has been battling terror for nearly 40 years, Ala said that the government's aims to modify the current Constitution will allow Turkey to extend its capacity for problem solving. Commenting on foreign fighters, Ala said: "Every country has discomfort about terrorist organizations and foreign fighters. However, this issue requires serious cooperation. We have deported 2,896 people from 92 countries up to now, and this is evidence of Turkey's solid security measures on the issue. We must ask the source countries, which are mainly from Europe, why don't you stop them there?"

Adding to Ala's remarks, Bozdağ said terror is a worldwide disaster and that the international community has the responsibility to act jointly in combat and support each other against terror. Regarding the European Court of Human Rights (ECtHR) cases from Turkey, Bozdağ announced that the number of applications within the last three years has dropped 47 percent. "Following our action plan for the ombudsman, personal application, compensation commission as well as preventing violations of the European Human Rights Agreement getting into action, the numbers of applications at the ECtHR and other matters are indicating a change in favor of Turkey," Bozdağ said.

Elvan said the adjustments to the Personal Data Protection law were made in accordance with the EU acquis. "We finalized our work on this matter, and will be conveying it to Parliament this week. We are trying to accomplish an independent structure that will include regulatory institutions," Elvan said, confirming that adjustments to visa liberalization will be completed at the end of March.
RELATED TOPICS