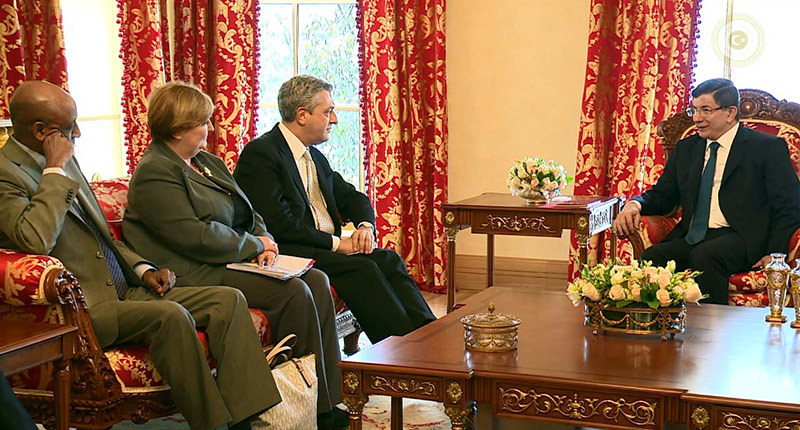 | DHA Photo
by Daily Sabah with AA Jan 16, 2016 12:00 am
Prime Minister Ahmet Davutoğlu discussed the refugee crisis with UN High Commissioner for Refugees Filippo Grandi during a meeting at the premier's Dolmabahçe office in Istanbul Saturday.

Grandi said he chose Turkey for his first visit as High Commissioner to send a message to the world that this country was doing a wonderful job in handling the huge number of displaced people.

Turkey is the largest refugee hosting country in the world. Around 2.5 million Syrians and hundreds of thousands of others, notably from Iraq live in Turkey, according to the United Nations.

Earlier Saturday, Gradi visited the Association for Solidarity with Asylum Seekers and Migrants in Istanbul.

On Friday, Grandi also visited a refugee camp in southeastern Turkey, where he described his trip as: "A visit to the front line in the world's largest refugee crisis".

Here, he visited a training center for Syrian women and a kindergarten. He also met the president of Turkey's Disaster and Emergency Management Authority (AFAD), Fuat Oktay.

The Syrian civil war has claimed more than 250,000 lives since 2011 and turned the country into the world's largest source of refugees and displaced persons.