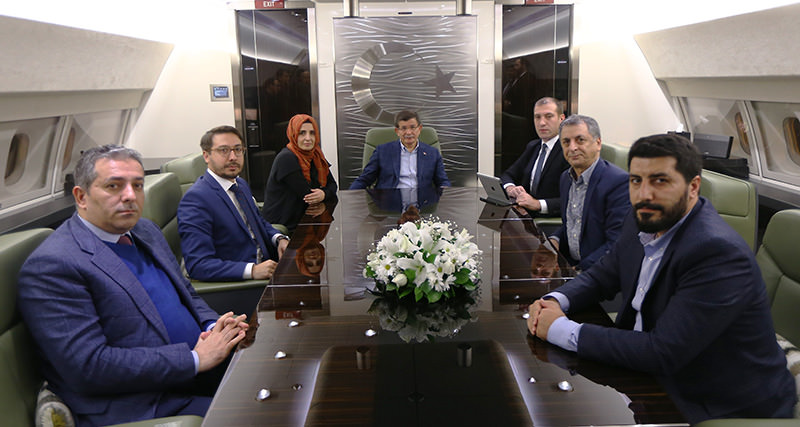 Daily Sabah Editor-in-Chief Serdar Karagu00f6z (L) on the prime ministerial plane with PM Davutou011flu (C) during his trip to London.
by Serdar Karagöz Jan 19, 2016 12:00 am

Following the end of extensive operations in the southeast, the government will implement various measures to ensure urban renewal and normal daily life, Prime Minister Davutoğlu told journalists during his trip to London

Prime Minister Ahmet Davutoğlu, speaking to journalists accompanying him on his trip to London on Monday, said the government's fight against the PKK and its various affiliates in the southeast entails a comprehensive policy that includes both measures that will be implemented before, during and after counterterrorism operations.

He said their main priority was to minimize civilian casualties, which necessitated detailed pre-operation planning and perfect coordination during operations. "If you do not plan well, you'll be forced to launch a new operation in three months' time," he said.

Security officials had planned very detailed operations, down to what was needed on the street level, he said, adding that the eventual result would be the re-introduction of public order and peace.

"Operations in Silopi are largely over. Obstacles and ditches are removed. Curfews were imposed to ensure the transition from PKK violence to peace ran smoothly. Security forces will not clean out the streets and then withdraw. They will stay there to provide security. Then the process will move toward bringing life back to normal, which means the opening of schools. We are close to achieving this in Cizre. The reason why progress is slow is to ensure no civilians are hurt. Security forces are proceeding step-by-step in certain places due to obstacles and mines."

He cited the reopening of the Habur Border Post with Iraq and the passage of cargo trucks, which used to bypass the town, through Silopi as signs of process. He also said that the losses of tradesmen will be compensated. "We sent TL 5 million [$1.65 million] to Sur, Diyarbakır just before boarding the plane."

Lack of support from locals had marginalized the PKK, Davutoğlu argued, adding: "Apart from Sur, life is normal in the rest of Diyarbakır. We have isolated them in their rural hideouts. The PKK tried to spread chaos through declarations of autonomy, but failed."

"We are grateful for the support shown to us by the people of the southeast. They [the PKK] failed to instigate mass uprisings." He also said that the PKK tried to exploit the families of the dead terrorists, preventing them from retrieving the bodies while claiming that the state was not giving the bodies to the families. "I issued a governmental decree announcing that anybody not taken by the family within three days would be buried by the state. Since then, they are still trying to exploit the families, but we are doing our best to prevent them."

Davutoğlu said the perfect coordination between the military and local police forces had ensured the success of counterterrorism operations , and added that the government intends to build on this success through spreading peace and prosperity throughout the region. "There is the Nur neighborhood in Cizre, which no security official could enter since the 1980s. There is no such thing now. We will do the same for every neighborhood in the region. We will build new police stations. In certain regions, we will initiate urban transformation if necessary."

Davutoğlu said the plan was to ensure cities in the region are renewed without harming their historical roots. "For example, we will remove the shanties in Sur, which is a historical area, but now is a center of crime and terror. The PKK built tunnels and drilled holes in walls in the area. Most houses would not stand an earthquake."

There will also be administrative initiatives, like turning Cizre and Yüksekova into provinces, he said. He said Şırnak, which is a province, had no room to grow, while Cizre has huge potential. "The same thing is true for Hakkari and Yüksekova," he said.

He said provincial centers can be moved to accommodate the region's potential and that historical buildings will be restored.

Davutoğlu said he will discuss the progress made on Cyprus and EU negotiations with British Prime Minister David Cameron, but the main focus will be Syria and Iraq, as the two countries that have the most experience concerning the region.

Davutoğlu also referenced his fruitful meeting with Chairman of the U.S. Joint Chiefs of Staff Gen. Joseph F. Dunford Jr. last October. "U.S. Vice President Joe Biden will be arriving when I return to Turkey. I told both him and President Barack Obama of the need for the two countries [to approach] regional problems from the same perspective, without which both countries' interests will suffer."

Davutoğlu argued that any solution to the Syrian civil war that ignored Ankara's security concerns would not work. "A Syrian regime that did not get along with Turkey cannot be stable. If [President Bashar] Assad had chosen reforms, the country would have been a beacon in the region. But he chose minority dictatorship."

He also accused Europe of ignoring Turkey's warnings about Syria. "A lack of strategy or care resulted in Europe leaving Russia in control of Syria. Syria is now under the effective occupation of Russia."

Davutoğlu said he was hopeful that Parliament would be able to prepare a new constitution to replace the coup-era relic that is currently in effect.

"If there is a chance for consensus, it would be the most important step in modernization in the history of democracy in Turkey. That's why it is worth trying even if it has a small chance of success. If a new civilian constitution is prepared, it will write history. The atmosphere in the preliminary talks with opposition parties was encouraging."

He said Republican People's Party (CHP) Chairman Kemal Kılıçdaroğlu's remark: "Let's topple this coup-era legal system," was a statement he fully supported. "However, in the past week he has made remarks aimed at poisoning the positive atmosphere," he argued. Davutoğlu also dismissed claims that a presidential system would introduce autocracy, noting that the current parliamentary system could hardly be cited as a perfect process that prevented a one-man rule.

Concerning a controversial declaration signed by more than 1,000 academics, Davutoğlu said he was against the mentality behind it. Accusing the state of massacres in the southeast was unacceptable and contrary to the facts on the ground, he said. "It is both contrary to facts and moral academic principles. Let them show me a single democratic country governed by the rule of law that allows an armed force apart from its legitimate security forces. The second issue is the localized declarations of autonomy. There is a Parliament in Turkey where this can be discussed. No one can tolerate such a de facto announcement. I can't believe these academics prepared this declaration. It came from somewhere and then they signed it. Many told me they had signed it without reading it. I believe each signatory will self-critically analyze the issue. If there is any criticism, we are ready to face them."
Last Update: Jan 19, 2016 4:35 pm
RELATED TOPICS