Turkey would strike YPG in Syria as it did PKK in Iraq's Qandil, PM Davutoğlu says 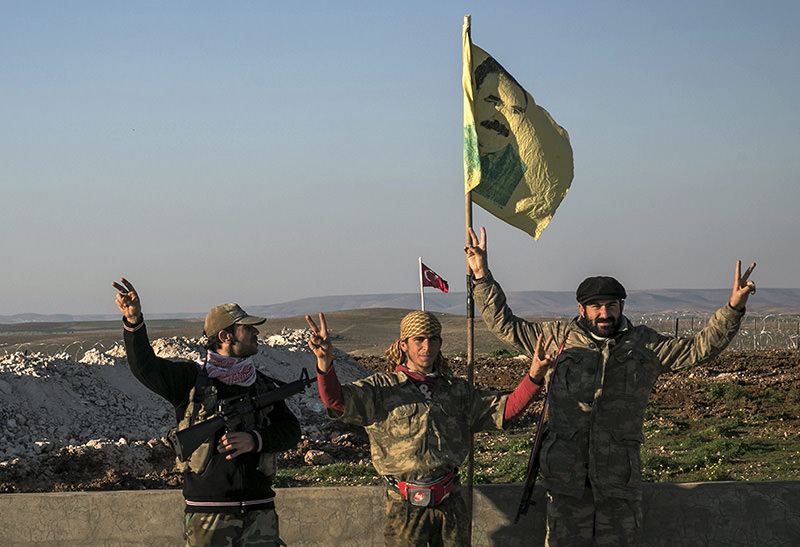 by daily sabah
Jan 23, 2016 12:00 am
Prime Minister Ahmet Davutoğlu said that Turkey reserves the right to strike YPG in northern Syria just like it strikes PKK terror organization's headquarters in northern Iraq's Qandil Mountains if it considers YPG's actions as a threat.

Davutoğlu's remarks came on the way from Davos to Ankara on Saturday. Speaking to journalists in the prime ministerial plane, Davutoğlu rejected U.S. Vice President Joe Biden's remarks that the PKK and PYD should be evaluated differently, and said that the issue will be evaluated in the meeting scheduled for the same day.

"Claiming that PKK and YPG are different means to be unaware of the weapons and groups smuggled and transferred from Qandil into Syria. The source of YPG's actions is Qandil, militants are dispatched from there. An important number of arms seized at the Syrian border are effects of [PKK] leaks into Syria. It may be viewed as such in Washington but not in Turkey. YPG looks in cooperation with the [Assad] regime, struggling with Daesh does not legitimize it. When Turkey sees threatening actions, arms transfers, it would do the intervention that it did to Qandil also to YPG" Davutoğlu said.

Underlining that the situation in Syria deteriorated with Russia's moves inside the country, Davutoğlu said that Turkey would take every steps necessary against all threatening developments along its borders.

Davutoğlu ruled out the possibility that the PYD joining the talks on Syria on the opposition side, adding that the PYD is "false opposition" as it cooperates with the Syrian regime.

Davutoğlu also criticized Biden's selection of journalists in a meeting held the members of press, which raised controversy as it only included journalists harshly opposing the ruling Justice and Development (AK) Party government. "I don't know who scheduled Biden's meeting program but it is obvious that [this person] does not want him to see the full picture in Turkey. Turkey is free country and everyone can met with everyone, but we would expect that Mr.Biden, as he wants to have an opinion about what is going on in Turkey, to meet with the relatives of martyrs, civilians fallen to the PKK terror. Or he could have also met with our citizens suffering PKK terror" Davutoğlu said.

Regarding the rumors in Turkey's political and media circles that the AK Party will enforce an early election to reach enough seats to make changes in the constitution, Davutoğlu said that this is not an option in the wake of more urgent problems.

Davutoğlu said that the return to a process similar to the reconciliation process in only possible if PKK lay down arms.