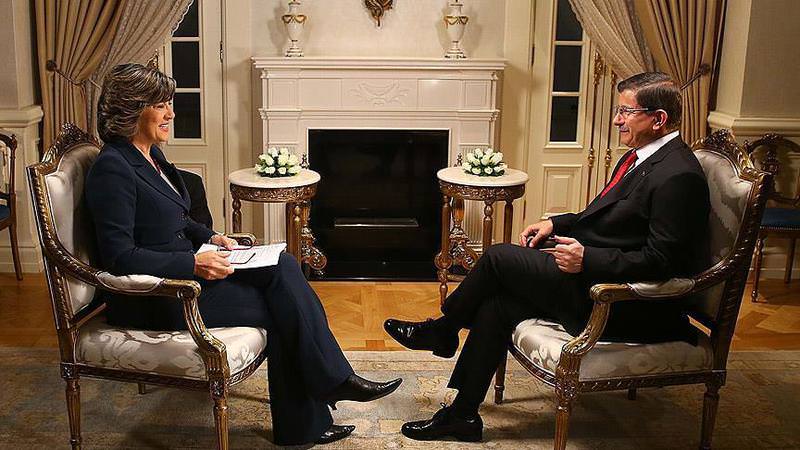 by Daily Sabah with AA Jan 25, 2016 12:00 am
Syrian Kurds need to be a part of the peace process to end the civil war, but those treating the terrorist group Democratic Union Party (PYD), and its armed wing People's Protection Units (YPG) as a legitimate partner "do not live in the reality of the region", Prime Minister Ahmet Davutoğlu said Monday.

"Without Syrian Kurds, the table cannot be complete. What we are against is YPG", Ahmet Davutoğlu told CNN's Christiane Amanpour.

The mainly Kurdish group is the Syrian wing of the PKK, which is listed as a terrorist organization by Turkey, the U.S. and EU.

"Those who recognize them as a legitimate partner, do not live in the reality of the region," said Davutoğlu. "Nobody can convince us that [cooperating with the PYD] is for peace".

The premier's remarks came ahead of new Syria peace talks set to begin Friday in Geneva.

The talks were initially scheduled to start Monday but were delayed by disagreements about which opposition factions would participate.

Davutoğlu held firm that the Syrian crisis would not be resolved with the Syria's Bashar Assad in power, adding that regime forces are "not winning".

On Russia's role in the conflict, Davutoğlu said Russia was intervening "in a very negative manner, in fact occupying Syria".

As one of the five permanent members of the UN Security Council, Russia "like others can contribute to the peace process", he said, "but we expect Russia to respect Syrian civilians and ... not to push Syrian civilians towards the Turkish border."

He said 90 percent of Russian airstrikes in Syria had so far targeted civilians and moderate opposition groups, as well as schools and hospitals.

"We know these, because all those who were injured by Russian bombardment are escaping to Turkey", he said. "Only 10 percent of Russian airstrikes are against Daesh."

More than 1,000 civilians have been killed by Russian airstrikes that began Sept. 30 to prop up the regime forces, according to the U.K.-based Syrian Observatory of Human Rights.

The civil war, which will enter its sixth year in March, has left more than 250,000 victims dead and made the country the world's single largest source of refugees and displaced persons, according to UN figures.

Neighboring Turkey, which is now the largest refugee-hosting country in the world, has spent nearly $8 billion caring for more than 2.5 million Syrian refugees on its soil.
Last Update: Jan 26, 2016 12:10 am
RELATED TOPICS