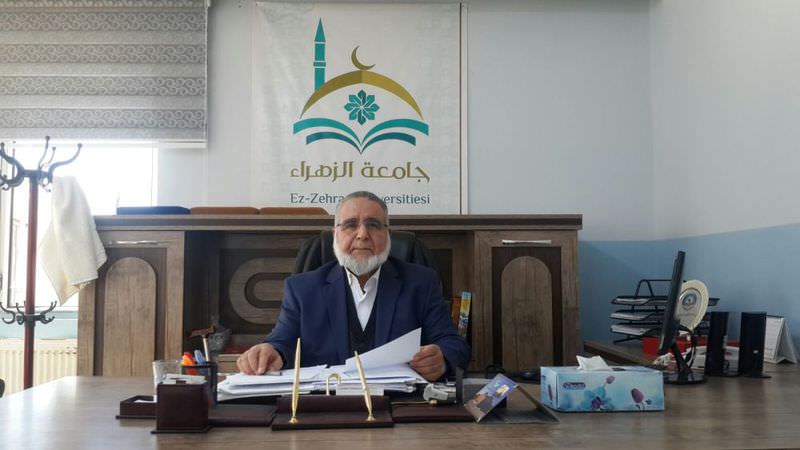 Mustafa Muslim, brother of PKK-linked PYD Co-Chair Salih Muslim said Turkey has stood with Syrian Kurds against DAESH and that Russia, as a staunch supporter, wants to use the PYD against Turkey

Syrian Kurdish academic Dr. Mustafa Muslim, known for his opposition to policies followed by his brother, Democratic Union Party (PYD) Co-Chair Salih Muslim, said in an exclusive interview with Daily Sabah on Thursday that Turkey has been a great supporter of Syrian Kurds against DAESH and the Syrian regime and argued that Russia has been using the PYD as a tool against Turkey. Refuting recent claims by PYD supporters that Ankara acts against Syrian Kurds, Muslim asserted that Turkey has been in solidarity with Syrians in general and with Kurds in particular at this critical moment in the Syrian civil war. "The Turkish position was a great example of a humanitarian position showed by both the government and people as they opened their borders, houses and hearts to Syrians, showing an example of humanity and solidarity. Charity institutions have also done a great job, especially the IHH [Humanitarian Relief Foundation], which sends aid to Syria and to refugee camps abroad," Muslim said.

"The Turkish position was a great example of a humanitarian position showed by both the government and people as they opened their borders, houses and hearts to Syrians, showing an example of humanity and solidarity. Charity institutions have also done a great job, especially the İHH [Humanitarian Relief Foundation], which sends aid to Syria and to refugee camps abroad," Muslim said.

"The Turkish position on [Syrian] Kurds is of high importance, especially in Kobani. If Turkey did not open its borders to the people of Kobani, DAESH could have killed them. They would have had to bear the bad winter conditions alone if they were not provided with tents and houses to stay in and food," he said, and offered his appreciation to the Turkish government and people for their humanitarianism for Kurds and Syrians.

Muslim, originally from Kobani in northern Syria, currently lives in Turkey's southeastern province of Gaziantep and works at the city's Zehra University.

Commenting on the Jan. 29 Geneva peace talks, which the Syrian regime and the opposition groups will attend, Muslims said: "I expect Geneva III to fail. The environment and conditions are full of signs that indicate the failure of the coming talks."

He stressed the significance of Russia's efforts to keep Assad in power, saying: "The Russian intervention strengthened Assad at the negotiation table, so Assad's regime will not compromise or give up any of the essentials to Syrian opposition easily. Russia, which has been given responsibility concerning the Syrian issue, supports Assad staying in power, and Russian airstrikes and bombs destroy the opposition, in military and civilians terms. Russia is the judge and the defendant, at the same time."

"In addition to this, strong opposition parties, which have control on the ground such as al-Nusra Front and Ahrar al-Sham and others, are not involved in talks," Muslim said.

"The Brigade of Islam, which is participating in the talks is no more than one of the [Salafi] Islamic groups in the opposition, and is not the biggest or strongest on the ground. Therefore, it cannot gather other groups on shared opinions and decisions," he said.

Muslim said that Syrian Kurds should be involved in the Geneva talks, but their representation should be balanced.

"[Syrian] Kurds should be represented in the Geneva talks because they have a military presence in Syria, and as civilians. But what kind of representation should there be, this is what needs to be discussed between opposition parties."

"I think that armed opposition groups, especially the Islamic groups, do not accept Kurds, as they accuse Kurds of cooperating with the regime. Add to this that clashes occurred between al-Nusra Front and Ahrar al-Sham on one side and the YPG [People's Protection Units] on the other," he said.

Muslim offered an alternative group to the PYD to attend the Geneva peace talks, saying: "Kurds need to either establish a third party in the talks, including unarmed parties and the political opposition inside Syria led by Hasan Abdul Azem and Haitham Manna. For example, the Kurdish National Council, which includes several Kurdish parties with no forces on the ground, can be part of the opposition delegation."

Prime Minister Ahmet Davutoğlu said on Tuesday that Turkey is against the PYD, the Syrian affiliate of the PKK, and its armed YPG participating in the Syria talks, which will be held in Geneva starting Jan. 29. Davutoğlu said during the Justice and Development Party's (AK Party) assembly group meeting in Ankara that he is not against Syrian Kurdish representatives joining the talks, deeming their presence at the table a "necessity."

"A terrorist organization joining the ranks of the opposition during the talks is unacceptable from our viewpoint," Davutoğlu said, referring to the PYD, and added: "The PYD, which cooperates with the [Syrian] regime, cannot represent the rightful fight of the Syrian people."

Muslim also commented on Russia's aggressive stance on Turkey and its involvement in the Syrian civil war, saying that Russia uses the PYD as a tool against Turkey.

"Russia wants to take revenge on Turkey due to the historical hostility since the Ottoman Empire. And recently, Russia has focused on taking revenge after Turkey downed the Russian warplane, therefore, it supports Turkey's enemies and stands with them, be they the Syrian regime or the PYD."

He also said that Syrian Kurds should not side with Russia, as Russia's support for Syrian Kurds is convenient and not genuine. "But I want to give a piece of advice to the [Syrian] Kurds in general, and the leaders of the PYD specifically, to understand the lessons of history, and remember what happened to the Kurds when they depended and trusted the big powers. They should remember the Russian position on the Republic of Mahabad, and what happened to [it president] Qazi Mihemed, and the position of the shah of Iran and what happened to [its defense minister] Mustafa Barzani. The Russian position is not different from that mentioned above, and will change with the changing of Russian interests," he said.

More than 180,000 Syrian Kurds crossed the Syrian border into Turkey as refugees after DAESH launched attacks on Kobane in September 2014. DAESH was eventually defected there and driven from the town after U.S.-led coalition airstrikes and peshmerga ground troops from Northern Iraq's Kurdistan Regional Government (KRG) entered the town from the Turkish border.

Around half of Syria's population has been displaced either internally or externally as a result of the four-and-a-half-year war in the country, which has left an estimated 300,000 people dead.

Turkey is currently home to more than 2.2 million Syrian refugees, many of whom fled fighting along in border regions.
Last Update: Jan 29, 2016 9:08 am
RELATED TOPICS