Russia to perform unarmed observation flights over Turkey despite tensions 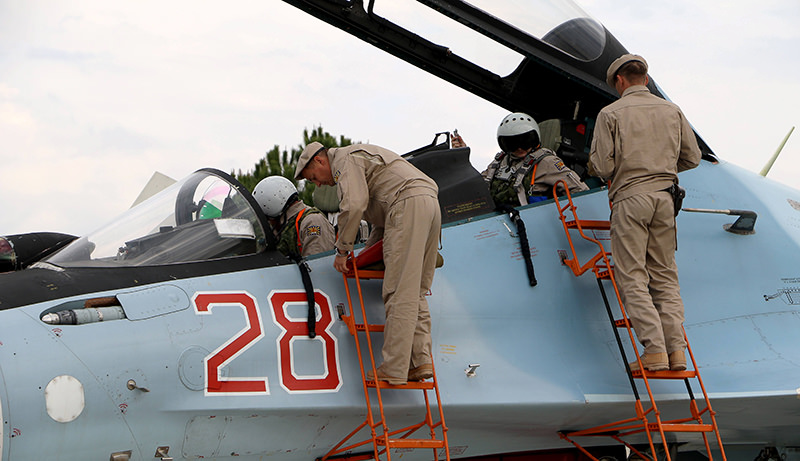 Russian servicemen assist air force pilots in a Russian Sukhoi Su-30SM fighter jet before departure on a mission at the Russian Hmeimin military base in Latakia province (AFP Photo)
by Daily Sabah with AA Feb 01, 2016 12:00 am
Despite tensions over a Russian violation of Turkish and NATO airspace, an agreed program of observation flights by Russian surveillance aircraft will take place over Turkey this week.

Turkey's military confirmed on Monday that Russia is due to conduct unarmed observation flights over Turkish territory from Monday to Friday.

The surveillance will be performed under the terms of the 1992 Treaty on Open Skies which facilitates flights by unarmed surveillance craft over foreign states, according to a statement published on the Turkish General Staff's website.

A team of Turkish specialists will be on board to monitor the flights.

Monday's announcement comes on the heels of a recent airspace violation by Russia.

Russian jet were warned in English and Russian before it violated Turkey's airspace for 20-25 seconds near southeastern Gaziantep province.

In late November, two Turkish F-16 fighter jets on an aerial patrol had intercepted a Russian military plane within the rules of engagement when it intruded into Turkish airspace on the Turkey-Syria border.

The intruding jet was warned about the violation 10 times within five minutes before it was shot down.

After the incident Russia imposed a range of unilateral economic sanctions against Turkey including a ban on food imports.
Last Update: Feb 01, 2016 3:02 pm
RELATED TOPICS