President Erdoğan: EU, US should recognize PYD as a terrorist group 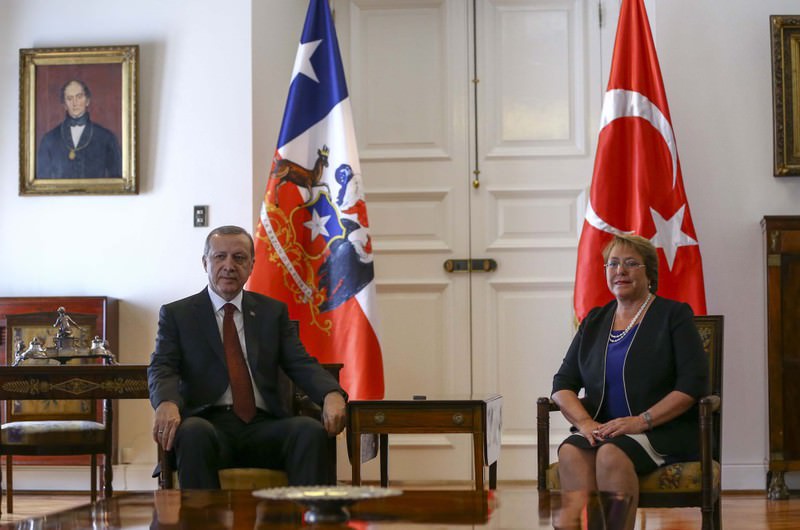 Accusing the EU of insincerity when it comes to the PKK and its affiliates, President Erdoğan said the 28-nation bloc should take solid action against PKK members in Europe and the organization's Syrian affiliate PYD should be listed as a terrorist organization, too

President Recep Tayyip Erdoğan, speaking to Turkish journalists accompanying him during the Chile leg of his five-day South American tour, accused the EU of insincerity when it comes to the PKK and its affiliates. He said, "They are constantly inviting PKK members to speak at the Council of Europe and other bodies. They tell us that they see the PKK as a terrorist group but then invite them to speak." He said Germany also considers the PKK to be a terrorist group: "I gave [German Chancellor Angela] Merkel 4,000 folders about the PKK and she told me all suspects were being tried and that she had 4,500 folders. So what's happening? The case files are increasing. How will we interpret Germany's stance? I told her that if that's the case, the German judiciary is not acting soundly." He said the whole world had condemned the terrorist attacks in France but had failed to show the same kind of sensitivity when it comes to Turkey.

"They tell us 'your pain is our pain,' or 'we are against the terrorist group,' but then send arms to the [PKK Syrian affiliate] Democratic Union Party [PYD]." Erdoğan argued that the U.S. and EU need to recognize the PYD as a terrorist group as they do the PKK. "They are terrorist groups, just like DAESH or al-Qaida," he said and added that most of the weapons seized from the PKK in the latest military operations in the southeast were Russian-made.

"We had warned the West not to give arms to the PYD before. Half of the weapons went to DAESH and the other half to the PYD. What were they saying? The PYD and its armed wing YPG [People's Protection Units] are fighting against DAESH. At the time, we told them that Russia did so, too. Will that make us see Russians in a positive light? The West committed grave mistakes on the PYD. They discriminate among terrorists. Some are good and others are bad, they argue. We need to establish clear concepts about terrorism," he said.

He said the violation of Turkish airspace constituted a violation of NATO airspace. "We are obligated to protect our national security. Our responses to cross-border transgressions do not violate borders. Any violations, by missiles for example, receive a response from our artillery," he said and added that Turkey would continue to follow its established rules of engagement.

His efforts were directed to resolve the tension between the two countries through patient diplomacy, he said, adding that he had also discussed the matter with U.S. Vice President Joe Biden as well as French and British officials. "However, there was no response. We don't want anything untoward occurring," he said.

He said Turkey's warning that it would not allow the PYD to cross west of the Euphrates still stands: "Turkey will not allow the PYD terrorist organization to create a corridor between the regions it controls. We have no problems with our Kurdish brothers, including those who live in Syria. We are only against the PYD establishing a corridor in northern Syria. There is also the PKK and YPG. We take steps in accordance with international law and we'll continue to do so. Our consultations with our NATO allies continue around the clock."

He also said that Turkey faces a serious refugee problem and the West has failed to respond adequately. Threats emanating from Syria, fired missiles and other weapons, continue to constitute a serious threat to Turkey, he said, adding that Russian policy in Syria could hardly be considered constructive. "Their argument that they are there because they were invited isn't right. Not every invitation should be accepted. First, countries should assess whether such invitations are legitimate," he said.

Erdoğan dismissed the possibility of a free and fair election taking place in Syria, considering how many people were pushed out of the country or displaced within it. He said he also did not feel that the U.N. was acting sincerely, asking: "Is it acting sincerely in Geneva?"

He said if terrorist groups operating in Syria were not clearly defined, any election would result in disappointment. "Most of Syria is controlled by DAESH. Large parts of it are under the control of other groups. The regime controls only 14 percent of the country. We have no idea about the number of voters," he said.

He called on all members of the anti-DAESH coalition and the U.N. to display the same kind of determination Russia had shown to protect its client, saying: "Proposals inviting [President Bashar] Assad to run again and depart if he lost are both disappointing and risky."

There was a general expectation the Geneva talks would produce a positive result, he said, adding: "However, the attitude of participants looks more like delaying tactics. We need determination and will, which I hope will be shown by the international community."

He said the anti-DAESH coalition, which included significant concentrations of U.S., British, French and German military forces at İncirlik Air Base, was conducting airstrikes. He said he would be discussing the recent developments with U.S. President Barack Obama after the conclusion of the talks in Geneva.

President Erdoğan also underlined Turkey's desire to establish closer business ties with Latin America, explaining this was the reason behind his tour. Diplomatic and economic ties with Chile were the strongest in the region, Erdoğan said, expressing his hope that business ties would further improve during the trip. He said 100 Turkish businessmen were accompanying him on the tour and if things proceed according to expectation, bilateral trade ties between Turkey and the region would advance.

Turkey had a free trade agreement with Chile, he said, but not with Peru or Ecuador. He said copper, and mining in general, was a significant component of ties with Chile, but that other sectors, including construction, could make serious inroads in the region.

On the domestic front, Erdoğan said security operations against the PKK would continue without respite until people's security in the southeast was assured. Concerning the pro-PKK conduct of Peoples' Democratic Party (HDP) deputies, Erdoğan said he was against closing political parties, but supported the implementation of the law to the letter against individual politicians. "Crimes committed can be seen by all. Prosecutors are preparing their cases. The judiciary will address the matter. If HDP deputies are found to be at fault, Parliament will be asked to revoke their immunity, which it should," he said, remarking that mayors from the HDP were directly involved in aiding and abetting PKK violence.

He said that as soon as the PKK threat is eliminated, the government needs to implement a comprehensive urban renewal and infrastructure program.