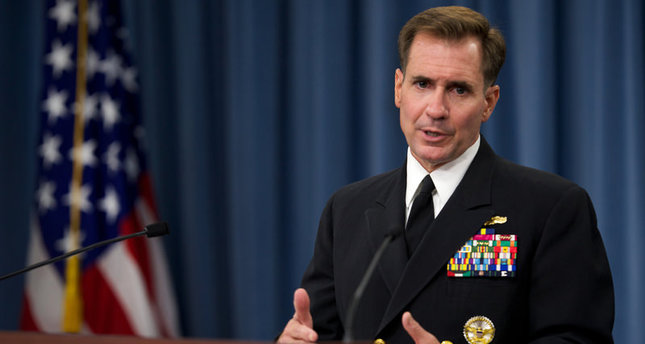 by Daily Sabah Feb 02, 2016 12:00 am
U.S. State Department Spokesman John Kirby confirmed late Monday that a Russian warplane violated Turkish and NATO airspace on January 29 and called upon the country to respect Turkey's sovereignty and refrain from further acts that could threaten the stability of the region. In the daily briefing, he also condemned the video prepared by the PKK's Syrian wing Democratic Union Party (PYD) terrorist organization in which the group called on Westerners to take up arms and attack Turkey.

"We can confirm that a Russian warplane violated the Turkish and NATO airspace on January 29. We have no doubt as to whether the plane entered Turkish airspace," he said.

"The U.S. shares the same views with NATO about collaboration with Turkey. We call upon Russia to respect Turkish airspace," Kirby added, calling upon both parties to ease tensions through dialogue.

When asked about the video prepared by the PYD terrorist organization in which the PKK-affiliate calls for attacks against Turkey, he said "We strongly condemn this call. Such actions cannot be accepted. We call for cooperation against Daesh."

While Ankara asserts the fact that the PYD is affiliated with the PKK, a designated terrorist organization by the U.S., EU and NATO, Washington does not share Ankara's concern.

The U.S. also provided arms to the PYD and its armed wing People's Protection Units (YPG) in October, which drew heavy criticism from Ankara. The U.S. air force dropped 50 tons of arms and ammunition to the PYD in the northern Syrian province of al-Hasakah. The 112 pallets reportedly contained ammunition for M-16s and AK-47s.

Praising Turkey for its anti-Daesh operations, he said "Turkey not only participates in the anti-Daesh coalition with its military, but also with its support to coalition warplanes bombing Daesh targets."
RELATED TOPICS