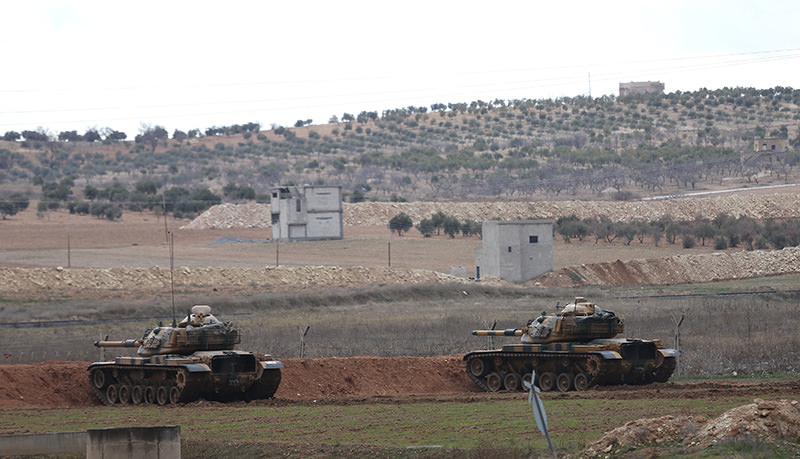 | AA photo
by Daily Sabah Feb 03, 2016 12:00 am
DAESH terrorists fired at the Karkamış district of the southeastern province of Gaziantep near the border on Wednesday, in the second incident of the terrorist organization targeting Turkish territory in the past two days.

Six mortar shells were fired from the DAESH-held town of Jarablous across the border, where three of them fell in an area behind Karkamış, two into an empty area of the Karanfil neighborhood near the border and one on a boulevard in the neighborhood of Etiler. A special bomb-dismantling team was dispatched to dispose of an undetonated mortar shell and no casualties were reported in the incident.

The local security office evacuated residents from the Karanfil neighborhood and municipality building.

After the incident, which caused severe damage to several houses, security forces retaliated by returning fire within the rules of engagement.

On Monday, security officers on minesweeping duty on the Syrian border were targeted by DAESH terrorists in the same district and returned fire.
DAESH continues to target the Turkish military and its facilities abroad, especially at the Bashiqa camp located north of the city of Monsul in Iraq.

Turkish soldiers deployed to the camp, where they are training Iraqi volunteers in the fight against DAESH, have deterred two attacks carried out by the terrorist organization in less than a month.

In the first attack on Dec. 15, DAESH terrorists attacked the camp and killed two local soldiers, injuring six others – four of whom were Turkish. Sources from the Foreign Ministry said that DAESH targets in the area were destroyed by Turkish forces.

The second attack came on the morning of Jan. 8 and, according to Turkish military sources, 17 terrorists were killed in the ensuing fight.
Ankara has persistently emphasized its willingness to take part in the fight against DAESH.

Previously, the General Staff announced that 30 DAESH suspects were detained in the southeastern provinces of Gaziantep and Kilis on Monday while attempting to cross the Turkish-Syrian border.

In the district of Oğuzeli in Gaziantep, eight foreign nationals with suspected links to the terrorist organization were detained while attempting to cross into Syria.

Presidential spokesman İbrahim Kalın said on Jan. 26 that Ankara is continuing intensive measures in the fight against DAESH. He said that 36,650 DAESH-linked suspects from 125 countries have been barred from entering the country as of January 2016.

He added that 3,065 people from 93 countries have been deported and 1,800 people have been detained in ongoing legal processes.
Turkey recognized DAESH as a terrorist organization on Oct. 10, 2013 in an official declaration.
Last Update: Feb 03, 2016 4:20 pm
RELATED TOPICS