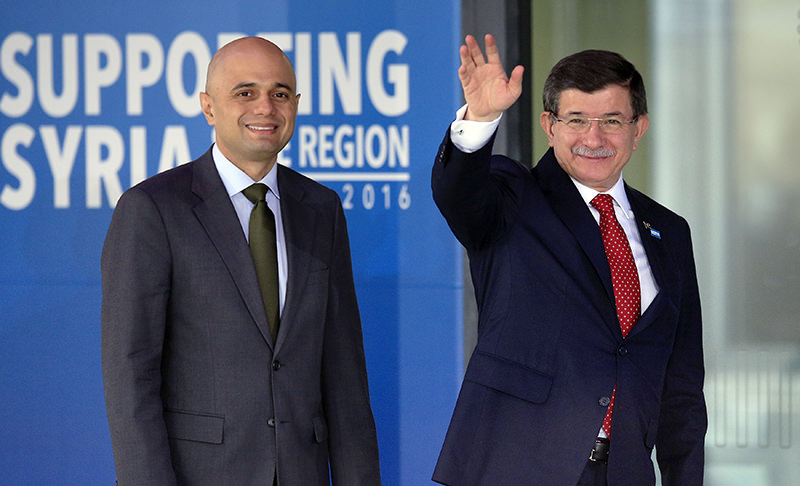 British MP Sajid Javid, left, welcomes as Turkish Prime MinisterAhmet Davutou011flu waves as he arrives at the Queen Elizabeth II Conference Centre in London where world leaders are meeting for talks over the Syrian refugee crisis (AP Photo)
by Daily Sabah with Agencies Feb 04, 2016 12:00 am
Prime Minister Ahmet Davutoğlu said that around 70,000 refugees are headed towards Turkey following the airstrikes on Aleppo, while urging everyone to raise more funds for Syrians who have been affected by the ongoing crisis, as he underscored Turkey's commitment to care for the refugees.

Speaking at the Syrian Donors Conference in London, Davutoğlu underscored that around 10,000 refugees fleeing the air strikes in Aleppo are currently waiting at the Kilis border, while he noted that around 60-70,000 people in camps located in northern Aleppo are headed towards Turkey.

Syrian Observatory for Human Rights monitor also said over 40,000 Syrians have fled the offensive carried out by the Assad Regime.

The Britain-based group said the mass exodus began on Monday as Assad forces began an operation that has seen them severe the main rebel supply route into Aleppo city and break an opposition siege on two regime-held towns.

The Observatory said the displaced had fled to different parts of Aleppo province, including the Kurdish town of Afrin, some 20 kilometers (12 miles) northwest of the area where the offensive has taken place.

Others have taken refuge in the west of the province, with the towns hosting them overwhelmed and some forced to sleep in the open.

Thousands more have fled to the northern town of Azaz or were sleeping in nearby fields along the border with Turkey, which is currently closed, Observatory director Rami Abdel Rahman said.

On the matter, Davutoğlu said the forces were seeking to do the same to Aleppo as they did to the besieged town of Madaya, where dozens have starved to death.

"This humanitarian logistic corridor is now under the invasion of these foreign fighters and regime forces (with) the support of Russian war planes," he said.

"What they want to do in Aleppo today is exactly what they did in Madaya before, a siege of starvation."

"No Syrian will be without shelter, security or food in Turkey" the prime minister reassured and added that the country will continue to provide support for the refugees regardless of the outcome of the conference.

"Turkey spent 10 billion dollars for refugees in camps alone" Davutoğlu said, and added that the country will continue to keep its doors open to everyone fleeing oppression, regardless of their ethnic, religious or sectarian background. He furthermore said that the refugees may require an additional cost of 20 billion dollars for social and economic needs.

He noted that the failure of Geneva talks was also due to the Assad regime, which continued its attacks on civilians, hospitals and schools in Aleppo and Latakia during the talks.

"About 90 percent of the Russian airstrikes in Syria target civilians" he noted, shortly after the the Britain-based Syrian Observatory for Human Rights said Russian strikes on six neighborhoods of Aleppo city had killed at least 21 civilians also injured many and the toll could rise.

He urged the United States to take a more determined stance against Russia regarding attacks on Syrian civilians.

The one-day Syrian Donors Conference -- jointly hosted by Britain, Germany, Norway, Kuwait and the United Nations -- was called late last year after calls were made for governments and international bodies to work better together to solve protracted crises.

The conference also considers ways to create job and education opportunities for people forced away from their homes.

Turkey, a key country hosting more than 2,5 million refugees, has alone spent more than $10 billion for humanitarian assistance, according to the official numbers announced last week.

There are 13.5 million people in need of humanitarian assistance in Syria, while the war has created 4.59 million refugees and resulted in the deaths of over 250 thousand people. The UN has set its funding requirements for the 2016 Syria response (Syria and surrounding countries) at US$7.73 billion.