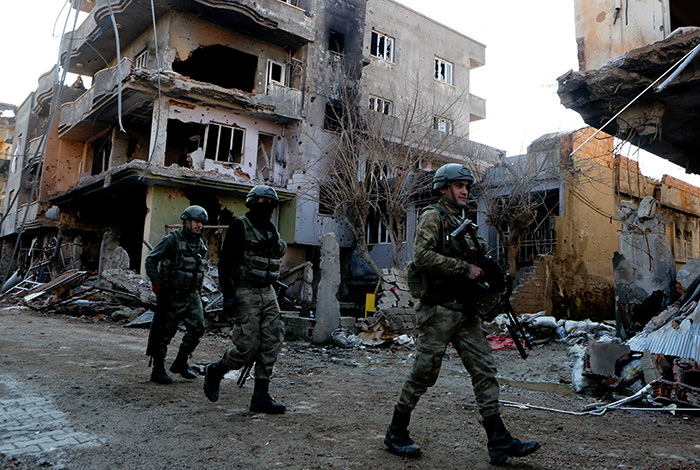 |File Photo
by Anadolu Agency Feb 05, 2016 12:00 am
Turkish security forces have killed 25 members of the terrorist PKK organization in several operations carried out in southeastern Turkey on Thursday and Friday.

Four terrorists were killed Friday following an armed attack on the police headquarters in the southeastern Şırnak province.

An operation has been launched to apprehend other terrorists who fled the scene following the gunfight, police said.

Separately, nine other terrorists were killed in an ongoing operation in the town of Cizre after an attack on security forces, which left at least one police officer wounded.

Following the clash, the terrorists set fire to a building, and ran away, police said, adding that firefighters were unable to reach the scene due to the ongoing fighting.

Meanwhile, 12 other terrorists were killed in a counter-terrorism operation in the southeastern province of Hakkari, the local governor's office said.

The terrorists were killed in an air raid Thursday targeting their caves and shelters, according to a press release issued Friday.

The air raid was conducted following intelligence that the terrorists had been preparing for a "sensational" attack on security forces, the statement said, adding that operations were ongoing to "decipher and prevent" further acts from the terrorist organization PKK/KCK.

The PKK -- also considered a terrorist organization by the U.S. and the EU -- resumed its 30-year armed campaign against the Turkish state in late July 2015.

Since then, more than 250 members of the security forces have been martyred and thousands of PKK terrorists killed in operations across Turkey and northern Iraq.
Last Update: Feb 05, 2016 3:05 pm
RELATED TOPICS