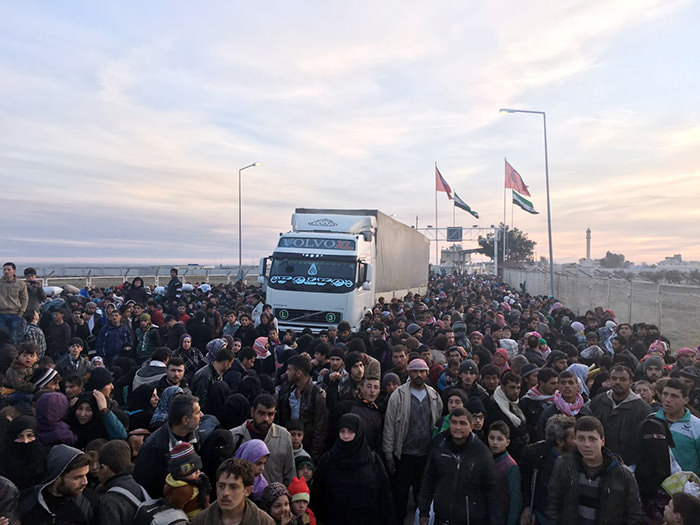 |IHA Photo
by Compiled from Wire Services Feb 05, 2016 12:00 am
Almost 110,000 refugees headed toward the Turkish-Syrian border following offensives by the regime forces of Syria's Bashar Assad against western Aleppo, which has continued for the last week with the support of Russian airstrikes. Increased Russian involvement in Syria has turned the refugee problem into more complicated to address.

Thousands of people, including Turkmens, have fled their homes located around Azaz, a town 7 kilometers away from the Turkish-Syrian border in northwestern Aleppo, and around 70,000 people now live in the 10 different refugee camps built by the Disaster and Emergency Management Authority (AFAD) on the Syrian side of the border. Moreover, 10,000 Syrians are waiting at the Öncüpınar border crossing in the southeastern province of Kilis to cross into Turkey.

Continuing Turkey's diplomatic efforts to host refugees on the Syrian side of the border, officials indicated that 30,000 more people are currently heading toward the border, which amounts to 110,000 total refugees seeking to cross into the country. Officials expressed concern that this figure might increase to 300,000 unless the offensives halted.

As some of the refugees headed to the fences in the area where the Arpakesmez village of Kilis is located, security measures were tightened and officials charged with border security have been notified about the imminent flow of refugees.

Following the suspension of peace talks in Geneva on Wednesday, international reaction mostly laid blame on increased military actions from Russia and the Syrian regime against opposition-held areas. With the offensives, Russia-backed regime forces aim to siege the center of Aleppo on the ground to cut the supply routes of the opposition groups from Idlib.

Regarding the continuing offensives and the refugee flow, Prime Minister Ahmet Davutoğlu had urged governments to raise more funds for Syrians who have been affected by the ongoing crisis, adding that the forces were seeking to do the same to Aleppo as they did to the besieged town of Madaya, where dozens have starved to death. "This humanitarian logistical corridor is now under the invasion of these foreign fighters and regime forces with the support of Russian warplanes," he said in his speech at the Syrian Donors Conference in London. "What they want to do in Aleppo today is exactly what they did in Madaya before: A siege of starvation."

During the one-day Syrian Donor Conference, although world leaders pledged more than $10 billion Thursday to help fund schools, shelters and jobs for refugees fleeing the Syrian civil war, participants acknowledged that prospects for ending the conflict have rarely been worse.

"The situation in Syria is as close to hell as we are likely to find on this earth," said United Nations Secretary-General Ban Ki-moon. Turkey, a key country hosting more than 2.5 million refugees, has spent more than $10 billion alone for humanitarian assistance, according to the official numbers announced last week. There are 13.5 million people in need of humanitarian assistance in Syria, while the war has created 4.59 million refugees and resulted in the deaths of over 250,000 people. The U.N. has set its funding requirements for the 2016 Syria response in Syria and surrounding countries at $7.73 billion.
Last Update: Feb 05, 2016 5:50 pm
RELATED TOPICS