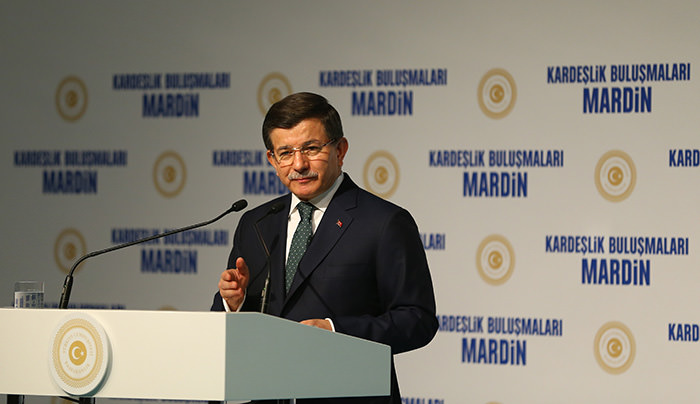 by Merve Aydoğan Feb 05, 2016 12:00 am
Turkey's Prime Minister Ahmet Davutoğlu traveled to the southeastern province of Mardin on Friday, where he introduced the government's newly drafted counterterror "master plan," saying it consists of 10 articles and 10 basic principles. Addressing a large crowd at Mardin's Artuklu University, Prime Minister Davutoğlu underlined that the government's Counterterrorism and Rehabilitation Action Plan aims to join the wisdom of the people together with the state, aiming to completely eliminate the distance between the nation and the state. Underlining that the new action plan is people-centered, Davutoğlu stressed that it aims to secure public order and protect the lives of citizens. In response to deadly attacks conducted by the PKK terrorist organization throughout southeastern Turkey, the government has prepared a "master plan" to tackle the region's sociocultural and economic problems.

Offering details of the action plan, Davutoğlu stated that the first item on the plan is the psychological factor, which he said it aims to merge wisdom with the state mechanism. Davutoğlu said, "We want people to see that we stand with them. We will implement people-centered state governance. The authority to use legitimate force is given only to those who received it from the people." The second detail Davutoğlu offered from the newly introduced plan includes restoring public order, by which the prime minister said fights against the self-determination of the "Stalinist" PKK. "Whoever threatens public order, be it DAESH, the PKK, or the DHKP-C [Revolutionary People's Liberation Party-Front], they will be prevented and stopped. I am here to introduce an order based solely on our honor and livelihood. I do not mean an order that some refer to as self-governance or feudal order," he added. Underlining that the government will distinguish between citizens and terrorists, Davutoğlu also added that a public order will be established that provides equal rights to everyone.

As talks on preparing a new constitution began on Thursday, Davutoğlu stated in Mardin that the third major point included in the plan is establishing comprehensive democratic reforms through a new constitution. "Let's change all of the tutelage actors in Turkey. We have suggested this to the HDP [Peoples Democratic Party], and their response was, 'you can come and drink our smuggled tea.' Rather than digging trenches, come to the Constitutional Commission that we have established…We have a place in Ankara to discuss whatever you need. However you cannot claim or show anything through standing by the trenches, barricades in Cizre," Davutoğlu added. He reiterated the importance of a new constitution, and said that through the new constitution, a new era will begin.

The fourth item on the "master plan" is a social mobilization campaign to heal the wounds of destroyed districts. Davutoğlu said that the government will heal all the wounds which were caused by terrorist attacks. With the new plan, Family Social Support Programs will primarily begin throughout the region. Davutoğlu assured that as all needs of the citizens are to be addressed, the support program will also provide regular housing benefits. The government also vows to restore the schools as well as hospitals, while providing sufficient education and will in order to get the children back on track.

The prime minister mentioned employment and loan projects as the fifth item on the plan and stated that it aims to compensate for the economic losses which people in terror-hit regions have suffered. Davutoğlu said, "The premium debts will be postponed, as the loan repayments for the merchants and craftsman, farmers are to be postponed. There will be significant moves to enhance empowerment, as we have already made TL 200 billion [$68.62 billion] investment in the eastern and southeastern regions of Turkey." The plan's sixth item aims to reconstruct the buildings, roads and infrastructure in clashes-hit areas. The matter of communication systems throughout the region has been introduced as the seventh step in the plan, as the government aims to create communication channels for deeper cooperation with people in the region.

Davutoğlu stated that the next item on the plan toward improving the region is the legislative and administrative reforms. Emphasizing that Turkey will cleanse all forms of illegal weaponry, Davutoğlu said the local administrations will further be empowered depending on their experience, and the government will not let anyone misuse their authority.

When the terrorist organization PKK relaunched deadly terror attacks throughout the southeast, the Kurdish reconciliation process in Turkey had ended. The new plan aims to launch a new reconciliation process, however Davutoğlu affirmed that neither the PKK terrorist organization nor its political wing will be included in the talks. "We will launch a new era of unity and brotherhood process. Those addressed will be the people themselves, meaning an advisory consul will be established with NGOs and opinion leaders. Though we will consider everyone an addressee in this process, no one with a weapon in their hand will be considered," Davutoğlu stressed.

The final article is a new process of facilitating peace platforms in the Middle East and Balkans. Davutoğlu stated that this movement to establish a brotherhood process and a spirit of unification will be applied throughout the Middle East, not just in Turkey.
Last Update: Feb 05, 2016 4:32 pm
RELATED TOPICS