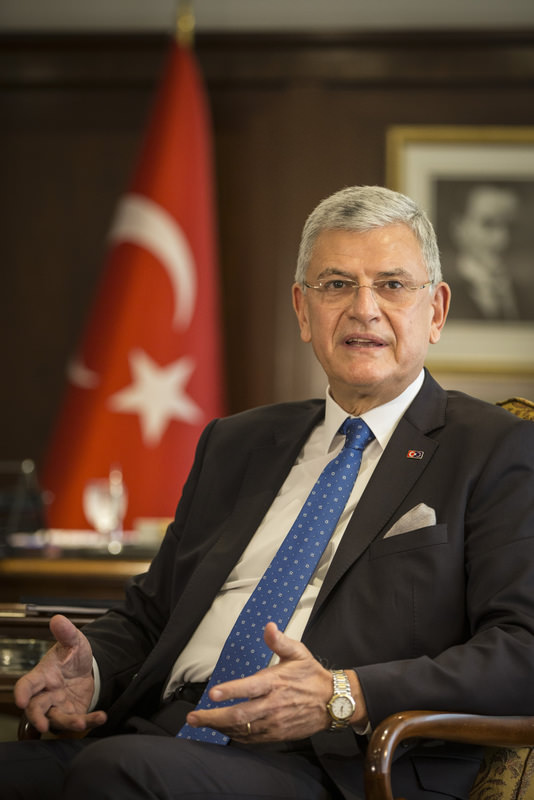 by Ali Ünal Feb 05, 2016 12:00 am
Speaking to a group of journalists accompanying him on his official visit to France on Thursday in Paris, EU Minister Volkan Bozkır said there is a mistaken belief in some European countries that Turkey can completely halt the illegal flow of migrants to Europe and asserted that such a feat would be impossible for any of the world's countries to achieve. He said that Turkey has been doing everything and using all of its resources to prevent illegal migration and that "there is no room for the blame game and it's not a solution to the refugee crisis."

Citing the number of illegal migrants that reached Europe last November to be 3,000, he said that with Turkey's efforts this figure has dropped to 1,750 in January 2016. Bozkır said that Turkey has been successful in preventing the flow of economic migrants into Europe, recalling visa restrictions for Syrians entering Turkey by air and sea since Jan. 8, 2016 as part of its efforts. "In the first week of this year, 41,781 people from Syria arrived in Turkey by air and sea. However, this figure dropped to 1,155 after a week when we started implementing visa restrictions," he said.

Bozkır also touched on the ongoing terror operations in the southeast, saying that some traitors have hidden behind the terms of democratic autonomy to start an operation aiming to divide Turkey.

"The PKK is using a new strategy of urban warfare from rural areas with an aim of establishing state-free zones like the cantons in Syria. However, security forces have gained ground in their fight against terror and the districts affected will be cleared of terrorists and life in the region will soon return to normal. Prime Minister [Ahmet] Davutoğlu will announce details of a comprehensive strategy to heal terror-affected areas on Friday in Mardin," he said.

During his visit to Paris, Bozkır met with French Secretary of State for European Affairs Harlem Desir and held separate meetings with the members and the Chairs of European Affairs Committee of the Senate and National Assembly. He addressed members of the French parliament on Turkish-EU relations and responded to their questions.

In addition, Bozkır met with French businessmen, including the CEOs of BNP Pariba, Eurosam, Thales and Engie, at a dinner hosted by the Turkish Embassy in Paris, which Desir also attended. After Paris, Bozkır went to Brussels to hold official talks with European Commissioners. There he will meet with European Commission Vice President for the Euro and Social Dialogue Valdis Dombrovskis and European Commissioner for International Cooperation and Development Neven Mimica.
RELATED TOPICS