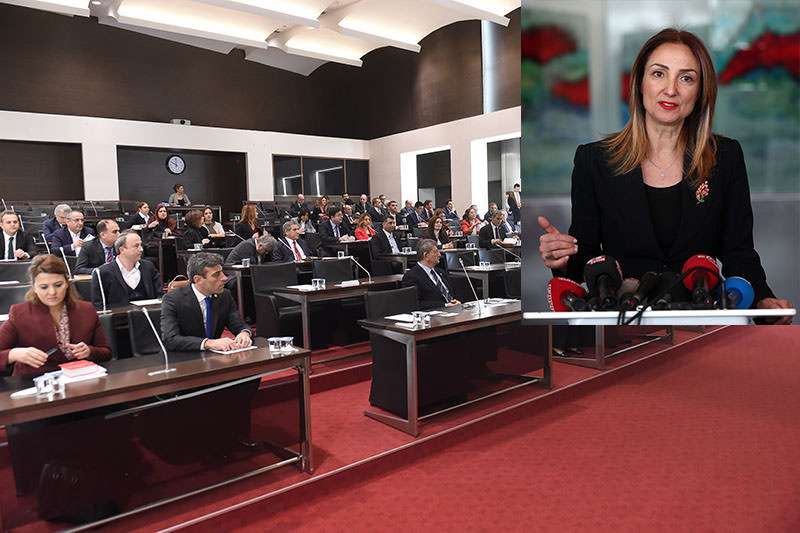 by Daily Sabah Feb 07, 2016 12:00 am
The main opposition Republican People's Party (CHP) Assembly met in an extraordinary session under the chairmanship of party leader Kemal Kılıçdardaroğlu on Sunday and approved to refer one of its deputies, Aylin Nazlıaka to the disciplinary committee for her dismissal from the party.

The Central Executive Committee of the party had already made the decision, but the party assembly's decision was also needed to dismiss Nazlıaka. During Sunday's session, 54 CHP deputies voted "yes" for Nazlıaka's dismissal whereas four others objected.

The decision was taken in the wake of Nazlıaka's previous remarks that a CHP deputy had taken down a portrait of Mustafa Kemal Atatürk, the founder of the Republic of Turkey, from their office wall at parliament, which is a convention for every deputy to have it hung in their offices.
After the news came out, the unnamed CHP deputy hung the portrait back on the wall, according to Nazlıaka.

The CHP issued a statement following its decision on Sunday stating, "It has been decided that Ankara deputy and Party Assembly member Aylin Nazlıaka, who led to CHP being debated in public opinion by making unsubstantiated and false claims that a CHP deputy took down a portrait of Mustafa Kemal Atatürk in their parliament room, is referred to disciplinary committee for her dismissal within the party's 68/A, F, and 70/A-a-b numbered decrees in its law."

Following the vote by secret ballot, which was reported to have lasted about four hours, Nazlıaka told reporters that she had been under a great deal of pressure to expose the name of the deputy who took down Atatürk portrait.

She said although this incident is "as real as my name is Aylin Nazlıaka," the deputy in question did not undertake their action under hostility against Atatürk.

The incident was blown out of proportion due to a communication problem and a snowflake turned into an avalanche, Nazlıaka said.

The deputy continued her words by saying, "I do not want CHP to be buried under such an avalanche. But, I also do not find it right that this incident was not managed well, and was blamed on me."